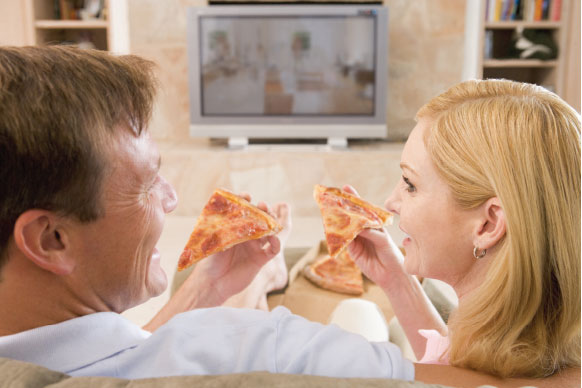 Is it possible that electronics could be an underlying cause for the rise of obesity and Type II Diabetes in the American culture? Though not the sole culprit, the truth is that television, computers, tablets and phones very much contribute to the general decline in aggregate health and weight management. The reason, however, lies far deeper than merely rendering the general population less active. Rather, it has much to do with the colored light emitted from the devices' screens and the resulting negative impact on sleep. Deficiencies in sleep, in turn, handicap not only the body's ability to utilize the energy it stores in fat but also has a profound effect on the amount of fat the body will create, fostering the tendency to gain weight.

Universally, sleep is recognized as a necessary component of overall health and vital to the body's essential functions. Human beings are diurnal creatures, maintaining activity during the daytime hours and garnering rest at night. These are circadian rhythms, tied specifically to the sun's movements and the angle of exposure to the light emitted by it. As the sun sets, the human body triggers production of the sleep hormone, melatonin. The National Sleep Foundation suggests that the average adult requires between seven and nine hours of sleep per night. The national average is currently reported to be 6.3 hours per night and falling. Six to nine hours of sleep allows an adequate number of sleep cycles to occur, during which the body performs necessary functions such as repairing or building muscle tissue. Some individuals function optimally on less sleep due to a mutated gene called DEC2. Those carrying the DEC2 gene require as little as six hours of sleep without adverse effect on their body or activities. This, however, is not the norm. Most people do experience adverse effects. Furthermore, this gene mutation is rare; the percentage of people carrying the gene is much lower than the percentage of people who reportedly sleep less than six hours per night.

The adverse effects of sleep deprivation are significant. Without adequate sleep, the brain's plasticity suffers a decline in overall cognition and memory. People experience a decreased ability to assimilate, categorize, store and then retrieve information. A high correlation between ADHD and sleep deprivation exists, as well. In 2011, a Stanford study noted that sustained sleep deficiency may not merely be a symptom of Alzheimer's and autism-spectrum disorders, but may even contribute to their progression. Likewise, mood is notably affected by a lack of sleep, manifesting most often in stress, anxiety and irritability. Twenty percent of persons diagnosed with insomnia are likely to develop depression. Scientists have observed a correlation between the rise in the population's incidence of Type II Diabetes and the decline in average hours slept.

The relationship of sleep deprivation to obesity is far more interrelated than simply fatigue, rendering the population less active and more sedentary. Sleep deficits have specific and profound impacts on weight management. Without adequate sleep, the body's ability to burn glucose and ability to use insulin appropriately is suppressed, and the body obtains less energy from the stored glucose, resulting in a physiological drive to consume more food. During deep, stage three, sleep, the liver mobilizes stored energy to rebuild tissues. Even with proper nutrition and healthy exercise, the body simply cannot release stored fat unless it experiences stage-three sleep.

Additionally, the endocrine system does not operate correctly without adequate sleep. The blood concentrations of leptin and ghrelin, hormones that control the body's hunger and satiety mechanisms, are altered when sleep is curtailed. The production of ghrelin (the hunger-driving hormone) increases, which drives a commensurate increase in appetite—appetite, especially for sugary, high carbohydrate foods. At the same time leptin levels decline. Leptin is the hormone that triggers the sensation of satiety. This hormonal imbalance results in radical changes in dietary preferences and overall metabolism. Like melatonin, leptin and ghrelin are tied to light conditions and circadian rhythms.

The relationship between these hormones and the light conditions that either stimulate or suppress them makes light a critical factor in sleep and weight regulation. This truth is complicated by the fact that screen-carrying electronic devices universally emit the same blue-violet light as the sun. Herein is the connection between electronics and obesity.

Electronics have superficial and obvious effects on weight, not the least of which is causing a decline in activity in the population at large. The American culture has widely adopted a practice of watching television or using other electronic devices as a means to relax before bed in the evening. While this is considered by many to be a relaxing and calming activity, it is not conducive to sleep induction. Rather the contrary: it is stimulating. The images on the screen rouse the brain, handicapping sleep. More importantly, however, is the fact that the blue and violet light emitted from those screens actually stimulates the pituitary and pineal glands, and suppresses melatonin production. This is a massive disruption to the body's natural circadian rhythms as it approximates living in an environment where the sun doesn't go down until the screen is turned off. Only then can the body produce the melatonin levels necessary for deep, restorative sleep, at which point the hunger and satiety hormones, leptin and ghrelin, will respond accordingly.

Deprivation of sleep is a stressor on the human body. Not only does it cause irritability and feelings of stress, it actually taxes the body and all of its systems in order to maintain basic function; that same stress is a major contributing factor in obesity. Though lack of sleep may not register consciously as a stressor, the physiological symptoms of stress are present; stress hormones secret into the bloodstream without conscious awareness. The body supplies its own stimulants in the form of adrenaline when experiencing the symptoms of sleep deficiency. Adrenaline in the bloodstream is the body's genetically-determined cue for the liver to mobilize energy reserves (glycogen stored in the liver to either "fight" or "take flight" in response to a stressor. In the animal kingdom, adrenaline and the energy reserves are metabolized as prey runs to evade predator. Yet the way the human body experiences stress in today's culture, the adrenaline and lost energy are never consumed. Today's fight or flight responses are largely confined to emotional reactions and don't have correlating physical demands. As such, the glycogen stores go un-metabolized and result in a spike in sugar. The body has just one place to store excess sugar and hormones: fat. Add the regular, recurrent use of caffeine and other stimulants Americans habitually use to remediate fatigue from inadequate sleep, and a vicious cycle ensues.

Elevating sleep to a higher priority will result in a myriad of health benefits. Ensuring that adequate hours of sleep are available—a minimum of seven and a half—is the first step in developing healthy sleep habits. Melatonin supplements are readily available and can aid some people in inducing sleep. Supplements, however, cannot substitute for behaviors conducive to getting adequate rest.

Given the adverse impact of the blue and violet light emitted from electronic screens on melatonin production, curbing usage of those devices at least an hour prior to bedtime is vital to sleep health. This, in turn, will permit the body to make full use of the sleep cycles, including stages in which fat stores are mobilized to rebuild tissue. Furthermore, sleep deficits will no longer stress the body unnecessarily, prohibiting the associated sugar imbalance that results from a perpetual adrenaline flood. Although this change may be simple from a philosophical viewpoint, it can be difficult to implement on a practical level due to the demands of a modern schedule, the rise in popularity of e-books and, perhaps most significantly, habit. In lieu of screen-bearing devices, consider audio books, and paper books (read under a full-spectrum light) or other relaxing behaviors such as bathing, journaling or meditation/prayer.

At the end of the day

Blaming blue- and violet-light-emitting devices for unwanted pounds would be convenient but not pragmatic. As with all health matters the responsibility lies with the individual to make wise choices for long-term benefit. By disconnecting from electronics of all types at least one hour prior to a reasonable bedtime, the human body will more easily garner the kind of sleep necessary to achieve better brain function, tissue rebuilding and optimal weight management.

Nancy Angelini and Thomas Dadant have more than 75 years of combined experience in nutritional supplements, herbal education, and the human microbiome in natural healing practices. They founded the Institute for Complementary and Alternative Medical Studies to provide professionals and the public with reliable, unaffiliated information on products, health and alternative medicine practices. For more information, please send email to This email address is being protected from spambots. You need JavaScript enabled to view it..