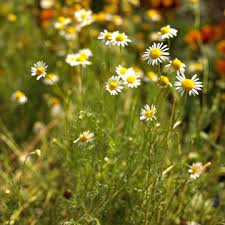 Two types of chamomile are used for health conditions: German chamomile and Roman chamomile. While the two kinds are thought to have similar effects on the body, the German variety is more commonly used in the United States

What Chamomile Is Used For
Chamomile has been widely used in children and adults for thousands of years for a variety of health conditions.
The herb is often used for sleeplessness; anxiety; and gastrointestinal conditions such as upset stomach, gas, and diarrhea.
It is used topically for skin conditions and for mouth ulcers resulting from cancer treatment.

How Chamomile Is Used
The flowering tops of the chamomile plant are used to make teas, liquid extracts, capsules, or tablets. The herb can also be applied to the skin as a cream or an ointment, or used as a mouth rinse.

What the Science Says
Chamomile has not been well studied in people so there is little evidence to support its use for any condition.
Some early studies point to chamomile’s possible benefits for certain skin conditions and for mouth ulcers caused by chemotherapy or radiation.
In combination with other herbs, chamomile may be of some benefit for upset stomach, for diarrhea in children, and for infants with colic.
NCCAM—funded research on chamomile includes studies of the herb for generalized anxiety disorder and abdominal pain caused by children’s bowel disorders.

Side Effects and Cautions
There are reports of allergic reactions in people who have eaten or come into contact with chamomile products. Reactions can include skin rashes, throat swelling, shortness of breath, and anaphylaxis (a life-threatening allergic reaction).
People are more likely to experience allergic reactions to chamomile if they are allergic to related plants in the daisy family, which includes ragweed, chrysanthemums, marigolds, and daisies.