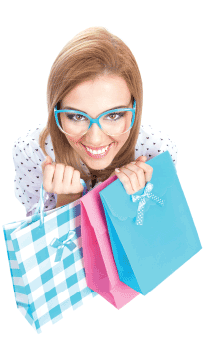 A friend recently wrote me that a buddy contacted her to help clean out a closet and organize some clothes. Her second sentence was complete disbelief that I did this for a living and that anyone could ever have the compassion and patience to be a professional organizer.
She had been greeted by a closet the size of a bedroom with shelves and racks overflowing with shoes and clothes. Another room had numerous plastic containers, along with boxes, suitcases and garment bags filled with more. And then, there was the walk- in closet, the bureaus, and, of course, the floor. My friend’s first impulse was to turn and run. I believe she gave it her best shot and then mentioned my name.
For those who have followed my years of writing about clutter, shopping, hoarding and downsizing, you know my style: no shame, no blame. I choose my words carefully because what I know is that all that shopping and all that excess are manifestations of something else; everything from a traumatic loss to feeling unloved or unaccepted. People who are addicted to the power and seduction of their credit cards are seeking to fill emotional voids.
However, not everyone who writes on these issues walks gently; some march and bang drums. But these writers also carry mighty credentials, statistics, and bespeak a truth that needs to be heard.
According to the American Journal of Psychiatry, more than 1 in 20 Americans have a shopping habit that jeopardizes their homes, finances, relationships or careers. Michael Hurd, a psychotherapist and author, stated clearly in his June 17th article in Delaware Beaches that excessive spending and buying for the sake of impressing, for the sake of belonging to the “in” crowd, came from a lack of self-respect.
He referred to those shoppers who felt they couldn’t get through life unless they had overspent on cars, clothing labels or watches in order to constantly project the right image and feel like a member of the elite. He wrote that once you start living your life and shopping in order to maintain a persona, you are living your life for others and dismissing your own values.
“This isn’t to say you shouldn’t enjoy the fruits of your labors and buy for your own or your loved ones’ sake or maybe a charity or a cause you value,” he writes. This is to say that if you’re spiraling into debt, spending money you don’t really have, because of your need to impress others with things you don’t really need, you’re headed down a slippery slope. For these shoppers, life is a constant show and tell, a perpetual need to have the latest in pricey brag and swag.
This is very different from the compulsive shopper who cannot establish boundaries and buys too much of everything and anything. Kimberly Palmer, senior editor for U.S. News Money, wrote in the May 16, 2012 issue that there were some tell-tale signs that you suffered from a shopping addiction:
You lie about or cover up your most recent purchases, either hiding them in closets or claiming you already owned the items.
You lie about where you are going if you’re going shopping, and you shop alone so no one will know.
You think of shopping as a hobby.
Shopping not only makes you feel better about yourself, but the effect of the purchase is a “high” a literal drug rush.
Your shopping habits are now putting you in debt, affecting your home and relationships, but you don’t want to talk about it and get angry when others try to help.
You don’t know where your money is going and don’t remember having made the purchase.
“Much of America’s growing number of shopping addicts is a result of Western civilization,” says April Lane Benson, author of I Shop, Therefore I Am: Compulsive Buying and the Search for Self. “Consumption fuels our economy. Materialism is rampant. We think that if you can’t buy happiness, you just don’t know where to shop,” she says. “Some onlookers admire compulsive shoppers’ ability to spend a lot of money, which can encourage them even more. A lot of times, it’s a smiled-upon addiction.”
You know, when the going gets tough, the tough go shopping…wink.

If you think that a major part of the problem is the internet and television where shopping is available around the clock, some would disagree. Donald Black, a psychiatrist and professor of psychiatry at the University of Iowa who studies impulse-control disorder writes that compulsive shoppers enjoy the sensory experiences of shopping; they like the sounds, the smells, and the feel of different textures. Shoppers are not afforded that sensory stimulation from home.
And finally, if you think this excessiveness is a recent phenomenon, we need only look at Mrs. Mary Todd Lincoln, the most lied about woman in history and a victim of malicious gossip and bad press. Always worried about her place in society, having lost her husband to murder and three sons to illness, she suffered from anxieties and maladies that would unravel any woman.
Author Catherine Clinton, in her book, Mrs. Lincoln, A Life writes that, “for most of her adult life, [Mary] suffered a disorder that might be characterized as financial bulimia. She felt compelled to hoard and spend in cycles of indulgence and regret. No matter what her real financial situation was, she continued to toss aside reason and judgment and to decorate and bejewel herself and her homes. After she had slaked her thirst for finery, she would become horrified by what she had done, yet the cycle never failed to repeat itself.”
In the 1860s, Mary Todd Lincoln was $25,000 in debt, a formidable figure then; a formidable figure now. It translates into over $700,000 in today’s money. In the 1880s when she returned from exile in France to her sister’s home in Springfield, she brought with her more than 40 trunks that weighed over 8,000 pounds.
We’ve all engaged in the occasional retail therapy; it’s easy, fun and rewarding. We’ve all delighted in a new purchase. But for many, shopping to excess, for whatever reason, is an addiction just like doing drugs, drinking, eating, smoking or gambling and it should be treated as such.
This is the information age; there are numerous sites, videos and articles on line that can begin to help those who need to see themselves in a different light. You can hear the stories of others and what they did to slowly turn their lives around. Do a little research. Gather your patience and your compassion, and instead of taking your friend or family member to the store, take them to the screen and guide them to a new life. It’s the kindest thing you can do.
< Prev Next >