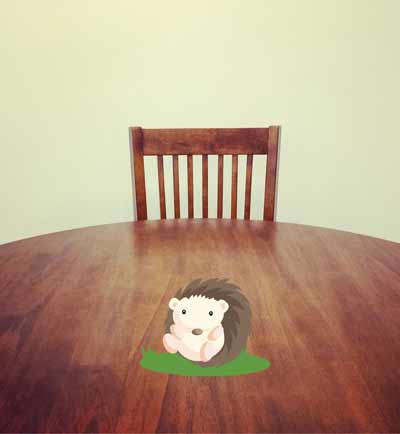 This was the response to my last question, “Would you like to have your dining room be a dining room again” during a phone consultation. And upon the first visit, true enough, the dining room was filled with cages of sleeping hedgehogs; nary a table nor china cabinet anywhere.

Meet Christine Matarese, a certified hedgehog rescuer, whose passion began in the 90s after recognizing that these “spiky balls of love” were the pet for her, and later realizing that these little creatures actually needed to be rescued.

Apparently, there were numerous reasons for Christine’s good heart and her dining room.  Many people did not research these pets before buying, unaware that hedgehogs needed to be socialized, touched often, fed and cared for. Nocturnal creatures, hedgehogs were awake at night, did not play by day, and owners were surprised to discover they could not change this.

They were equally surprised that this was neither the plush toy from the gift shop nor the active cartoon character with the cute voice from television.  If people were moving to Pennsylvania, they learned that hedgehogs were illegal there.  In households where the kids grew, moved away, and left their hedgehogs at home, the parents didn’t know what to do with them.

If owners didn’t separate the male from the female, suddenly, there was a host of babies who needed homes.  In one home, there was a nasty divorce and the hedgehogs had to go somewhere.   And then there were the people who forgot this was an animal that needed a vet and couldn’t pay for the care.

Christine claims she didn’t do a lot of entertaining, so her dining room became what was perfect for her: a rescue center.  She took in the relinquished and unwanted as well as the handicapped: one gal only has three legs. Cages opened from the top, not the sides, so the only suggestion, to make reaching and cleaning a bit easier, was to have the cages resting on chairs or benches to raise them off the floor, but the dining room…it is what it is.

Which brings me to the point of how we use space:  dining rooms today are not necessarily the Norman Rockwell family dining and gathering places of yore.  More often they’re filled with the obligatory furniture, but they invariably become merely a place to walk through between the living room with the television and the kitchen with the goodies, suddenly springing to life for the Thanksgiving or Christmas gatherings.  Often, the table and chairs become the universally accepted landing strips and dumping grounds of the house…which means it’s still not a “dining” room.

For one family that had dining room space, no furniture, but an office shoved far off the beaten path of the house, I suggested that the dining room become the office.  The man of the house had so isolated himself that his beautiful office became his personal dumping ground while he settled himself into the kitchen and family room areas where there was more light, the refrigerator, the television and more action.  He believed he needed to have ultimate silence when what he really wanted was to work among the family activity.

Offices need the same elements as the kitchen:  a good surface, good lighting, and good storage but we don’t like to be as detached and cut off from activity as we think.   When I suggested shelving, an L-shaped desk and drew out where it would all be in relation to the window and the light in the dining room, I distinctly remember the 7-year old in the family gasping in delight.  There’s a future interior designer or engineer in the making.

Nothing in the rule books tells us how our space has to be used: the home is our space to use for our particular needs. Finishing off the basement to be a family room or a mother-in-law suite aren’t the only options.

One friend tells the story of using her living room as the woodworking studio.  There wasn’t a basement for equipment, and she had no need for a living room when she had a small cottage industry that was more important to her than a sofa and coffee table.

Thus, the table saws and sanders as well as areas for glue, paint and décor were set up where most convenient.  When it was time for her to sell the house, she and her son put up new wall board, painted, put in wall-to-wall carpeting, and had the place professionally cleaned.

In working with a woman whose crafting department was limited to a tiny, ill-equipped room that contained handicapped rescue cats, I suggested using the large, unused bathroom.  It wasn’t the first time I suggested a large bathroom for crafting or storing crafts: there were the surfaces, the lighting, the electricity, and the storage…and water.   We put stand-alone shelving in the shower stall, put a portable counter top over one of the sinks, and began organizing crafting in the cabinets below.

One couple had a new large home and a bedroom with two closets.   Imagine my surprise when I saw her closet, jammed with clothing, and his closet, jammed with clothing and a highboy.  That beautiful piece of furniture was suffocating in there and the poor man could barely get in to find anything.  Suggestion:  use one of the guest rooms as a “gentleman’s dressing room.”  Move into a different space the clothing, the highboy a nice rug, mirror, and leather chair.  That would leave the lady of the house with two closets in one room:  one for spring / summer clothing and the other for fall winter things.  This was a very popular suggestion.    Sleeping together is one thing; sharing closets is always something else.

Homes today are larger than ever, but whether you’re in a 4,000 square foot mansion, a loft, or a studio apartment, it’s your right and delight to figure out how the space can be manipulated best for your needs.    This is real estate and it’s valuable. Whether you’re rescuing hedgehogs or starting something new, be fearless and unapologetic for how you make it work.

Karen Jessee is a professional organizer and founder of Simply Organized. She is a member of the National Association of Professional Organizers and the Philadelphia Chapter of Professional Organizers. She encourages people to simplify their lives and works with those who need to  downsize and get organized.  Karen helps clients make the decisions and create the systems that are best for them. She also  teaches the strategies  to help clients gain greater clarity, control, productivity and peace. Karen is a public speaker on these topics. Visit her website at: www.nowsimplyorganized.com
< Prev Next >