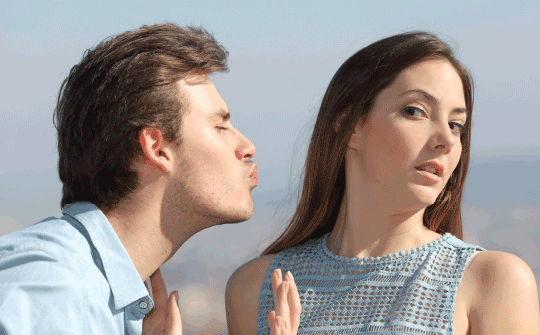 Being Too Eager
There’s a not-so-fine line between expressing genuine interest in someone, and becoming too eager, too fast in your pursuit of a relationship with them. It may be hard to hold back your excitement when you feel like you’ve met someone you really click with, but coming on too strong in the beginning may come across as needy or desperate and/or pushy and pressured; all of which tends to be a turn off. Here are some of the telltale signs of what I refer to as being “obsessively eager” to be in a relationship with someone:

While the stereotype tends to be that women rush into relationship too quickly, my experience in working with individuals has shown me that men do it just as frequently. I believe the difference is that television and movies typically typecast this behavior from women as being desperate & needy; whereas men in this role are typecast as the underdog who lacks the experience to get the girl. But I digress…

If you’re someone who tends to get overly excited by the prospects of dating someone who seems highly compatible, remind yourself to slow down. If you’re right, then this person isn’t going anywhere. Take your time and just enjoy being in the moment with them (versus thinking about the happily ever after that you hope will be in your future). Pay attention to how frequently you are attempting to communicate with them via phone, text, email, etc. Does it seem like there is a balanced, back and forth of communication? If not, I recommend that you stop reaching out and wait for them to contact with you. To quote the late-great Maya Angelou, “Never make someone a priority, when all you are to them is an option.”
Idealization
In the beginning of almost all new relationships, there is a period where it seems like all the stars have aligned, the sun is brightly shining, the birds are chirping, and the person we’ve just met is the most amazing human being on the planet. This initial stage of the relationship is called Limerence, and it typically lasts from the first 6-12 months of a relationship. Limerence is the result of a biochemical process created in the brain. In an article written about the biochemical roots of limerence, David Sack, M.D., explains that, “Responding to cues from the hypothalamus, the pituitary gland releases norepinephrine, dopamine, phenylethylamine (a natural amphetamine), estrogen and testosterone. This chemical cocktail produces the euphoria of new love and begins to normalize as the attachment hormones (vasopressin and oxytocin) kick in, typically six to 24 months into a relationship” (2012).
In the wake of the release of this “chemical cocktail” people tend to selectively focus on the positive personality traits and behaviors and either knowingly disregard, or genuinely don’t see, the person’s negative personality traits, flaws, faults, imperfections, etc. During this period of time, it’s very difficult to distinguish limerence from genuine, romantic love. When someone has moved beyond this stage, they are able to see the person as a whole, with both positive and negative traits and behaviors. However, some get stuck in this stage, and continue to idealize the person, putting them up on a pedestal. These relationships tend to end for a variety of reasons, the most common being that the person cannot possibly live up to their partner’s idealized expectations, as they are flawed human beings, with faults and imperfections—just like the rest of us.