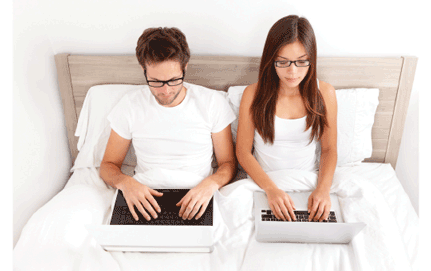 Do you spend significant amounts of time on your computer, tablet or Smartphone?   If you do, then like an increasing number of people, you may rely so fully upon one or all of these modes of communicating and connecting with the outside world that you might not be able to envision life without it.  While you no doubt have a very real need for these devices in your daily life and work, is it possible that your reliance on them could be eroding the quality of your life, and in particular, your love life?

Is the time you spend online having an effect on your face to face connections?  What happens to relationships when one partner finds themselves flirting with Facebook friends while the other partner would prefer to spend time with them?  And how do relationships fare when one partner is late to bed because they would rather find romance online?

To know whether your online activities are harming your love life, it's important to understand the crucial distinctions between sexual shame and sex addiction.  Although both terms are used frequently in the media and in everyday conversation, few people seem to understand what they truly mean and how they differ.

In fact, sexual shame is often used as "proof" or evidence of sex addiction .  And while the National Council on Sexual Addiction and Compulsivity defines sex addiction as "engaging in persistent and escalating patterns of sexual behavior acted out despite increasing negative consequences to self and others," this definition leaves a lot to be desired. For instance, many gay and lesbian people suffer from sexual shame due to the judgments of others and they continue to be gay and lesbian despite "increasing negative consequences to self and others" such as angry family members, loss of employment, etc. But as we know, being gay or lesbian does not make you a sex addict and it would seem that the presence of sexual shame is not proof of sex addiction either.

How then would you know if either sexual shame or sex addiction was effecting your life?  Perhaps a couple of real life stories can help us explore this further.

Max still enjoys sex with his wife. In fact he craves sex with his wife in a way which makes her feel frightened at times. She wants Max to connect with her by looking into her eyes and telling her that he loves her. Max does this during foreplay, but when their activities switch to oral sex or intercourse, Max seems like a different person. He becomes more distant and demanding. Often, Max will insist that porn is playing in the background so that he can watch while having sex with his wife.  - It is the only way he can achieve an orgasm.

Before that, I had thought the concept of sex addiction was just an - attempt to shame and control. After all, anyone who deviates from the monogamous, heterosexual sex which most religions and many laws seem to champion could be considered fair game.

And in fact, I often see the words "sex addiction" used to shame people who simply enjoy sex, often sex which is not condoned by the mainstream culture or the majority of people. Treating sex addiction has become a very lucrative business.  Most of the treatment websites I have visited cast such a large net for potential clients, that almost anyone could qualify as a sex addict in need of their expensive treatments. Many sex addiction experts use shame and guilt as the litmus test for diagnosing sex addiction which doesn't allow for the fact that a lot of otherwise emotionally healthy people feel guilt and shame surrounding sex.  . In fact sexual shame is so pervasive that most of us suffer from it in one form or another, making it a very poor indicator for possible sex addiction.

Every time a public figure finds himself or herself implicated in a sex scandal, there seems to be an immediate rush to label them a sex addict. Ironically, it seems that many politicians, religious leaders, sports figures and celebrities who are publicly shamed for their sexual activities, welcome the "sex addict" designation.  Given that rehab is actually socially acceptable and the public seems to love "sinners" who "repent," it makes great sense from a public relations standpoint. But while claiming one has a "disease" may garner sympathy while avoiding social ostracism, it does not constitute an authentic diagnosis.

Perhaps recent scientific research can shed some light on these questions. For instance, it is now known that online porn can cause Erectile Dysfunction (ED). What is important about the recent findings, is that this effect does not extend to all pornography but ONLY online pornography. And the resulting erectile dysfunction is not due to the refractory period which occurs after sexual satiation nor it is just about developing a preference for pornographic images and scenarios. Instead, it seems that something quite disturbing is happening to the human brain while viewing online pornography which leads to the desensitization of the brain to dopamine, the chemical responsible for creating sensations of pleasure.

Apparently, the internet delivers so much visual stimulation in such a rapid fire manner that the brain literally becomes overwhelmed by all the input and consequently reduces its response to the stimulus. This is particularly problematic for young people whose brains are still developing. And amazingly, the speed of one's internet connection can determine how entrenched the resulting desensitization will be. In other words, if you are fifteen and using high-speed internet you are likely to become more addicted than someone who is older and has slow internet.

A recent article in Science Daily reported the scientific findings of Jessica Tracy and Daniel Randles of the University of British Columbia who have documented the connection between shame and addiction. According to Tracy and Randles, "One reason that certain sobriety programs may be effective, is because they encourage people to see their behaviors as something they should feel guilty, but not necessarily shameful, about."  The article goes on to say "Feeling guilt about previous behavior, as opposed to shame about being a "bad" person, may be an important component of recovery."

Furthermore, Tracy and Randles assert "Our research suggests that shaming people for difficult-to-curb behaviors may be exactly the wrong approach to take. . . Rather than prevent future occurrences of such behaviors, shaming may lead to an increase in these behaviors."

Shame not only confuses us when we attempt to distinguish sex addiction from sexual pleasure, but it also fuels addictive and compulsive patterns. Therefore, one effective way to gain clarity as well as heal destructive behaviors is to lessen shame. Whether you are simply engaging in sex or sexual fantasies which you feel ashamed or conflicted about, or if you truly have an uncontrollable compulsion, eliminating sexual shame is essential to restoring emotional and sexual well-being.

I work with sex addicts and can attest that it IS a very really affliction. However, too many health professionals are quick to apply this diagnosis to anyone who deviates from the norm sexually and that is not a definition of addiction. Instead it is an indicator of prejudice and ignorance.

Increasingly, there is a cultural norm which says "I am addicted" but fails to comprehend the depth of despair of true addiction. Slapping the sex addiction label on anything which deviates from the monogamous, heterosexual norm not only indicts individual sexual diversity and freedoms but serves to water down the suffering of true sex addicts and sexual compulsives. When we carelessly label activities we may disapprove of as addictions, we devalue the term and its original meaning as applied to compulsions which lead to the destruction of lives. We oversimplify the human condition and insult the people who are suffering from the agony of a true addiction.

Veronica Monet's perspective on sex, anger and relationships may challenge your old beliefs but you are sure to find her insights uniquely helpful to your personal life. Veronica is a highly visible spokesperson for sexual rights and has appeared on every major network as well as CNN, FOX, CNBC, WE, A&E and international television programs.  She has been profiled in many publications including The New York Times and has lectured at a variety of academic venues including Kent State, Stanford and Yale Universities. As a Certified Sexologist (ACS), Certified Sex Educator (SFSI), Certified Anger Management Specialist (CAM), and a Trained Volunteer for the Center Against Rape and Domestic Violence (CARDV) Veronica Monet coaches clients over the telephone and in-person at her Northern California office. You are invited to contact her at This email address is being protected from spambots. You need JavaScript enabled to view it., call toll free at 888.903.0050 and listen to her online radio program, The Shame Free Zone, at http://www.sextalkradionetwork.com