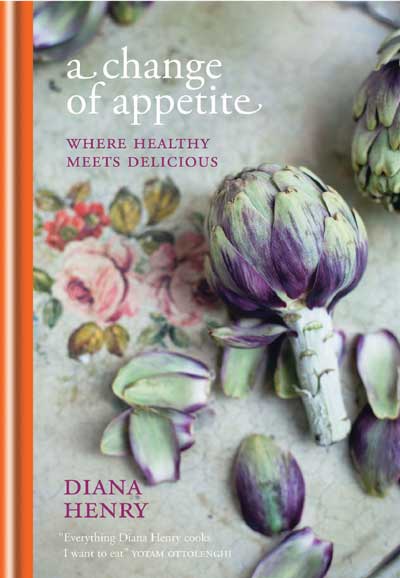 In her year of good eating, Diana lost weight, but this was about much more than weight loss. Led by taste, it was about discovering a healthier, fresher way of eating. 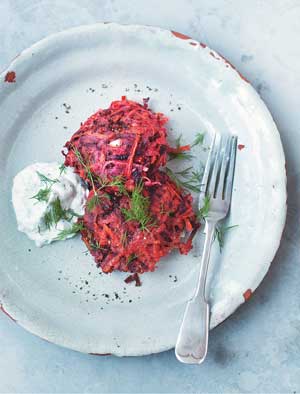 Beetroot And Carrot Fritters With Dill And Yogurt Sauce

The beetroots make these an amazing colour but, if you prefer something mellower in tone, use parsnips or butternut squash instead. You can make different versions too: add 200g (7oz) crumbled feta to make Greek-style fritters; or add a chopped, deseeded chilli, 2 tsp ground cumin, 2 tsp ground ginger and 1 tsp ground coriander to the onions and fry for a couple of minutes to make Indian-spiced fritters. (Use coriander leaves in the yogurt if you make the latter.)

Heat ½ tbsp of the groundnut oil in a large non-stick frying pan and gently sauté the onion until it is soft but not coloured. Add the garlic and cook for another two minutes. Put into a bowl.

Coarsely grate all the other vegetables, keeping them separate. After you finish grating each variety, put them into a tea towel and squeeze out excess moisture. (Better use a clean J-cloth for the beetroots as they will really stain your tea towel.) Add the vegetables to the onion with the eggs, season well and mix together. Make the sauce by mixing all the ingredients together.

Heat another 1 tbsp of groundnut oil in the frying pan. Spoon enough mixture into the pan to make a batch of fritters each about 8.5cm (3½in) in diameter. Cook over a medium heat until a crust is formed on one side, then carefully turn each over and cook on the other side again until a crust is formed. Don’t over-brown them or they will burn on the outside before they are cooked. After the crust is formed, reduce the heat right down and cook for four to five minutes on each side, or until the vegetables are cooked through. (You’ll know from the taste whether they are cooked right through. The potato becomes sweet.) You can keep the cooked fritters in a low oven while you finish the others, adding more oil to the pan to fry them if necessary.

Serve the fritters with the yogurt sauce, sprinkled with more dill. 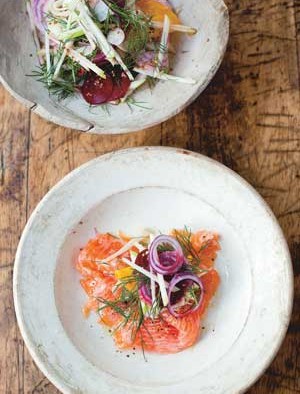 This is the kind of dish I could eat at every meal: clean tasting, with bright flavours. If you want bread with this, rye is the obvious choice. Or try the Rye crackers recipe on (page 53) in the book. Serves 6

Make the dressing for the salad by mixing the sugar with the vinegar and stirring until dissolved. Whisk in the mustard until well combined.

Don’t make the salad too far in advance as it becomes flaccid if it sits around. Try to do it no more than 30 minutes before serving.

Quarter the fennel, trim the tops and remove any coarse outer leaves. Core each quarter. Using a very sharp knife or a mandoline, cut the fennel into wafer-thin slices. Put the fennel into a bowl and toss with the lemon juice. Add the onion. Halve and core the apple and cut the flesh into matchsticks. Add the apple to the fennel and lemon with the dressing. Toss. Cut the beetroot into matchsticks or very thin slices. (Hold on to the beetroot; it needs to be added at the last minute or will stain everything.)

Using a very sharp knife, slice the salmon finely, as if you were slicing smoked salmon (leave the skin behind). Arrange the slices on individual plates (or a platter), not overlapping. Brush the slices with the extra virgin oil, then sprinkle on salt and pepper. Squeeze lemon juice over and leave for two or three minutes before serving. Add the beetroot and dill to the salad and serve with the salmon.

Diana Henry was crowned “Best Cookery Writer” in the Fortnum & Mason Food Awards 2013, “Cookery Writer of the Year” by The Guild of Food Writers in 2009 and in 2007 for her column in the Sunday Telegraph’s Stella magazine in the UK. She is a contributor to many British magazines including Red, House and Garden, Country Living and Waitrose Food Illustrated. She is the author of a number of bestselling cookbooks, including: Roast Figs Sugar Snow; The Gastropub Cookbook; Cook Simple; Salt Sugar Smoke and Plenty. Diana lives in London with her partner and children.