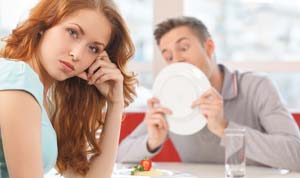 As the resident sex therapist for Living Well Magazine (in my head, not in reality), I feel compelled to help readers as best I can, whenever they reach out to me.
After receiving several questions from LWM readers in response to my article “Missteps on the Path to Finding Love” (LWM September 2015) Primarily, readers wrote to me asking for more dating advice about ‘what not to do.’ Email after email, readers shared their experiences and asked my advice. A pattern emerged: I was being asked very similar questions, despite the differences of the individual’s specific experiences and demographics (age, sex, etc.).
Below are two of the more common questions, followed by my list of general “dating don’ts.”
Q:
I’m newly divorced after being married for almost 20 years. I’ve bought several books about dating and I’ve worked on sticking to “the rules.” I have gone on a few dates, but everything is so different now. Do you have dating suggestions for someone who’s been out of the game for so long?
A:
The fact that you’re trying to learn and you’ve had the courage to put yourself out there is a very good start! The first piece of advice I have: Don’t think of dating as a game. Yes, I know that many of the books on dating have “rules” and “tricks” to help you “get the one you want.” There’s a reason why pick-up artists aren’t called relationship artists, and it’s because they’ve only mastered the art of seduction. Seduction only gets someone so far (and it usually ends in the bedroom). The tips and tricks that people use are nothing more than manipulation games. It’s all an illusion and eventually the other person will see through it.
If you’re looking for a serious relationship, don’t date like it’s a game. Be the most authentic version of yourself that you can be. After all, that’s the person that they’re going to end up with if they want to be in a long-term relationship. In my opinion, it’s better to just be yourself and find someone who genuinely likes you for who you are, rather than pretending to be someone you’re not, and lose them later because you’re not who they thought you were.
Q:
I’m not into bars or clubs and I can’t stand dating websites. I feel like if I’m just patient, eventually I’ll find ‘the one.’ I’ve been single for a little over three years and I’m tired of spending Saturday nights alone. Do you have any advice?
A:
While I admire your patience, I caution you to reflect on the difference between “patience” and “waiting.” When one is being patient, they have put forth effort for something to come to fruition, and now they are calmly awaiting the results. When one is waiting, they are passively putting their life in the hands of some kind of other (e.g., fate, God, the Universe, etc.). They’re waiting for life to produce a result, when they have not actively participated in the steps necessary for its creation. If you’re waiting for “the one” to just fall into your lap, don’t. Outside of romantic comedies and romance novels, this rarely ever happens in real life.
What are you doing to actively meet someone? My advice is this: Do things you enjoy, even if you have to do them alone. Find new and interesting hobbies, outside of your home. Challenge yourself to try something new, go to new places, or try to learn something new. Bottom line: You must be an active participant in your own life. Put effort into engaging in activities where you’ll be meeting new people, while being patient along the way.

General Dating Don’ts
I wish you all the best on your dating journeys!
< Prev Next >