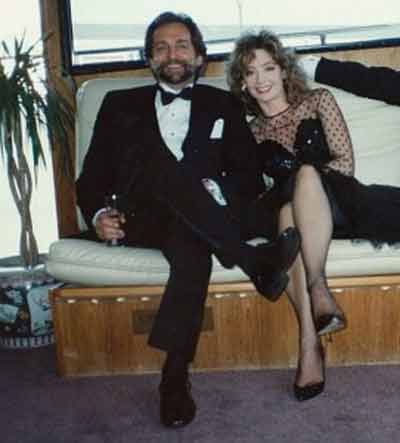 I have only been in love – truly, deeply in love – twice in my life. So I can be extremely tenacious when the inevitable challenges to relationship arise. I don't give up easily. I don't walk away at the first sign of trouble.
When I was much younger, I hoped that the intensity of my love would fix things . Somehow, if I loved hard enough, things would get better. Over time, I learned that love is not enough. I had to change many of my relationship patterns in order to give that love a fighting chance.
So I read a lot of self-help books, took communication classes, joined many groups and got into therapy. I was on my way to becoming a relationship expert! Of course it was the real life, in the trenches, experience that taught me the most.

And one thing I had to learn over and over and over again for decades and in a myriad of ways, is that I cannot control my loved ones' addictions.
I met the man who would become my first husband when I was just twenty-two. His name was Adrian and he was thirteen years older than I and already had two ex-wives and a child by each. I was just out of college and devolving into my addiction to alcohol. He was newly released from a two-year prison term for dealing cocaine.

We partied all the time and at first it was a lot of fun. But of course, all too soon we were selling coke to our friends, keeping guns in our apartment and drawing the drapes during the day. Cocaine psychosis was having its way with us. And in addition to being paranoid, we were becoming volatile. Our arguments led to injuries such as black eyes and even a stab wound but we were still in love.
Fortunately, as emergency personnel and law enforcement became increasingly involved in our lives, we were required to attend 12 step meetings. It didn't slow Adrian down much but I began reading the Big Book of AA and eventually some of its message got through my inebriated brain.

The day I got clean and sober was nothing short of miraculous for me. I had what many refer to as a spiritual awakening as I got on my hands and knees in prayer. What had been a death wish moments before was suddenly transformed into an earnest desire to live.

Of course, I wanted my man to get clean and sober too. I still loved him after all we had been through. And I worried that he might die if he didn't change.
He was desperately in love with me and wanted to follow me wherever I went. He tried the 12 step program but usually wound up doing coke in the bathroom during the meetings. He found a sponsor and tried to work the steps. But soon enough Adrian succeeded in pulling his sponsor with over ten years of sobriety back into a cocaine addiction. Adrian sold his sponsor more coke than he could afford, so he took his furniture and Harley Davidson in trade.


During Adrian's brief attempt at sobriety, we had become engaged. There was a ring and a photo shoot. We were trying so hard to clean up our lives and stay together. But when Adrian began riding his former sponsor's motorcycle, he went from my fiancée to my stalker. Driving to work or home, I would often discover him in my rear view mirror. It was terrifying for me because by now, Adrian had moved on from cocaine to crystal meth and his personality was so different from the man I once knew that I had no idea what he might be capable of.
He did break into my apartment wearing gloves to hide his fingerprints but fortunately all I had to do was give him the engagement ring and he left. Eventually, another woman entered his life and he stopped stalking me. It would be five years before we would meet again. And by then, he was clean and sober.
Being the hopeless romantic that I am, we quickly got engaged again. I thought everything would be different now that he was sober. And in many ways it was. But Adrian never took to sobriety with the same degree of devotion that I did. We were married and he managed to stay sober for ten years. Then he began experiencing back pain and in the end prescription pills led him right back to drugs and alcohol.
But before that happened, we battled his addiction to pain pills for five long years. And during that time, although he never touched alcohol or illicit drugs, he began behaving like an addict and our marriage suffered severely.

My response was typical of someone who is married to an addict or alcoholic. I tried to warn him, to convince him, to educate and enlighten him. I attempted to love him more. I experimented with negative reinforcement by refusing to show him affection. I nagged. I cried. I pleaded. I grew cold and distant. Or I felt immense sympathy for his struggle and prayed for more patience. I would see his inner child self and just want to hold him and make the pain go away. And sometimes I tried to pretend things were not as bad as they were.
When he finally totaled his Corvette, was fired for being high at work and got arrested for possession, we agreed it was time to divorce. But that was not the end of our love story. We hung on for another eight years after our divorce, living in separate homes but still dating. Eventually our sex life went from hot to nonexistent but we simply transitioned into a platonic friendship. Our grief over losing our marriage and our life together spanning nearly thirty years, was just too great for us to simply walk away.


But that long descent into the disease of alcoholism and addiction leads to only one of three outcomes: institutions, insanity or death. Adrian is not in an institution and he isn't dead. But his sanity is severely compromised. Although I have not met with him face to face for over four years, I do occasionally call him. And I choose to time those phone calls earlier in the day, before he gets too drunk or too high. Even in his more lucid moments, Adrian is a shadow of the man he used to be. His brain is too damaged by years of active alcoholism and addiction to work very well. I find that very sad. And I am grateful I am no longer married to him because I could not and would not want to live like that.

Looking back at our thirty year saga, I can say that I know I love deep and true. I can tell you that I will fight for love. And I can tell you that if anyone thinks love is enough to cure addiction, they are a fool.
When I chose to stay married to Adrian while he battled his addiction to pain pills, I had to learn something called "detaching with love." I wasn't good at it. But I learned a lot about it during those five years of hell.
Detaching with love requires healthy boundaries and assertion skills. It means you say no while keeping your heart open and filled with love. It requires staying connected to your empathy for yourself and for your loved one while refusing to indulge the dishonesty or the negative behaviors.

For instance, when Adrian verbally abused me, I practiced asserting my healthy boundaries by refusing to engage in a conversation with him while he spoke to me in that way. I remained calm. I didn't return his insults nor did I try to defend myself. I said no to the way he was talking to me and informed him that if he continued to yell and name call, I would have to remove myself from the room. If he followed me into another room, I would have to leave the house until he was more reasonable and respectful.

Obviously, detaching with love did not get Adrian sober. But it did help me to disengage from his denial about his addiction so that I could begin to see things more realistically. One of the reasons I teach what I teach is because I want to spare my clients from the years and years of suffering I endured. You don't have to put in thirty years before you are allowed to wake up and see the true nature of addiction in your loved ones. And you don't have to waste time trying to "educate" or "enlighten" them.

I can tell you that alcoholics and addicts will never change unless and until they are ready to do so. If you choose to stay in a relationship with someone who is drinking or drugging addictively, you can do so. But make sure you are not harboring any hopes that your love will change them. It won't. The only person you have the power to change is you.

Veronica Monet, ACS, CAM gratefully teaches her clients how to identify healthy boundaries, how to assert those boundaries with love, how to detach with love and how to realize the life of your dreams regardless of what others choose to do or not do.This email address is being protected from spambots. You need JavaScript enabled to view it. to find out how she can help you do this and more.

used with permission -the article originally appeared on  blog at www.TheShameFreeZone.com