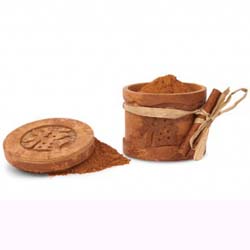 natural, earthy box that smells as good as it looks. Rough-hewn circular box is made entirely from cinnamon bark, with carved leaf motif fitted lid. Box is sized to hold cinnamon sticks. Cinnamon trees have a life cycle of five years, after which the bark is used for crafts and the wood is burned as cooking fuel or ground up to make cinnamon dust.