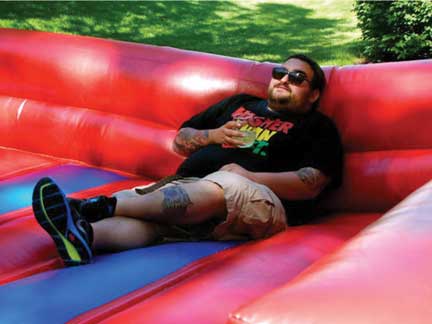 Life has a not so funny way of throwing a wrench in your plans. The ability to adapt and overcome is a required skill. I am here to tell you that I got hit by one of life’s biggest wrenches. My cardiologist described my life in the most blunt and concise way, “You have had a shitty half a decade”. Since April 2006 my life has been in a free fall, but in that time I have discovered that I can survive anything.

On April 12, 2006 my life as I knew it was changed forever. Up until that point I was a college kid majoring in Communications, with a minor in having too many friends to get anything done and “beverage sciences”. I went to school at Marymount Manhattan College in New York City, so I got to live in the best city in the world, while studying my crafts. While walking around town with a friend, two blocks away from where I was living in midtown Manhattan, I was crossing the street and was struck by a BMW SUV going 40 miles an hour. My first reaction was to try and get out of the street, because of the fear of being hit by a car again; I don’t think I have ever moved so fast in my life. After an accident like that you don’t expect someone to be moving, let alone setting a world record speed for fastest reaction time in the world. My body felt like I was just hit by a car, there is literally no other way to describe it. Thankfully the driver stopped and asked me how I was doing, and I replied in the best New York way that I had learned from my time in college and began to curse him out with the college level NYC SAT words that I had learned. He told me that he was really sorry for hitting me; he said that he ran the red light because he was lost and looking at his GPS. At this point, time begins to get jumbled in my head because the next thing I knew I was in an ambulance.

I had several firsts that night, first time getting hit by a car, first time escaping the clutches of death and first time riding in an ambulance. My way to deal with things that are negative is trying to find the humor in it, so I tried to crack a few jokes in the ambulance, but they shut me up rather quickly by giving me some oxygen, I have never breathed better in my life.
At the hospital I was brought into the children’s ward, I was 20 at the time, which is still considered a child in NYC. The only visible mark that I had from being in an accident was a three inch case of street burn, street burn is what happens when you decide to do a slide right on the pavement, while having nothing between you and the street, not fun. It was hard for me to get the doctor treating me to believe that I was in any kind of pain, let alone believe that I was in an accident, when the only visible injury was a three-inch street burn. I told the doctor that it felt like I was hit by a car, but I think she only took it as a figure of speech. I was given Tylenol and told that I was fine to walk home. Walk home after being hit by a car? The emergency room doctors performed no medical procedures, except for putting a band-aid on my one visible battle wound. No X-Rays, no nothing.

The next day my parents came and rescued me from school, because I could barely walk, I mean I had just been hit by a car, so that was understandable. If I knew then what my life was to become in the aftermath of that accident, I really don’t know what I would have done. Getting doctors to believe that I was in an accident was a long journey, my life had become an endless gamut of tests and “does it hurt when I do this?” or “What’s your pain level on a scale of 1-10?” At some point I decided to cope with the constant pain I was experiencing and eventually returned to school. I almost finished college, but that is not what happened.

Over time my pain level increased to unbearable levels and I began to develop a major “gangster limp”, my way of making it seem cooler than it actually was. After years of looking for a doctor and gaining around 100 pounds, I finally found a doctor that could help me.
It was determined that I had multiple herniated discs in my lower back and that I needed to have surgery, and soon, or else I could suffer irreversible nerve damage. Surgery was not very amusing, it was a very painful recovery, but after years of having nothing helping me I felt like I was finally going to be on the up and up. I was for a little while, holding an easy job and working through physical therapy, my limp disappeared and I was finally feeling like my normal self again. But “Winter is Coming”.

In March 2010 I was working in a kindergarten program as an aide in the classroom, we had a tough class. My pain level was way down and I was starting to feel good again, but life really has a way of hitting you with a car or something like that. After work one day I went to my doctor and told her that I had a bit of a cough and was just not feeling well; you know what she tells me? She told me that I needed to head to the hospital immediately because my vital stats were out of control. After rushing to the hospital and having more tests done it was finally determined that my heart was functioning at 15% and that I had cardiomyopathy, the only words that I heard was Heart Failure. Needless to say it took me a few minutes to actually process what I had just learned. I don’t know too much about anatomy, but what I did know is that heart failure sounds pretty serious, and as I would find out I was not prepared for what was to come. I wasn’t able to return to work and my health began to rapidly decline, spending most days in bed all day due to lack of energy, that’s what happens when your heart does not pump enough blood efficiently.
At this point I started amassing a pharmacy size stash of heart medications that have become part of my daily routines. A 26 year old should not have to wake up every morning and take a fist full of pills. There was also a concern that I had a chance of suddenly dropping dead, as if things weren’t scary enough already. My doctor suggested that I get an ICD (implantable cardiac defibrillator), in the event that my heart decided to take an extended break from functioning. So a few months later I ended up getting this alien looking device inserted inside my chest, I call it my “1UP mushroom”, like the ones from any Super Mario Bros. video game.

Now after going through all of that I can tell you that my worst symptom was not a physical one. My views on life were skewed and my future was looking pretty bleak for a long time. For some reason people do not deal well with people being sick, so I ended up spending a lot of time lying in bed incredibly lonely, waiting for something to give, but the world doesn’t work like that. It took a long time for me to come to terms with my situation, my head was suffering the most damage at this point, not physically of course, but mentally. Until one day I decided that I was the only person that could help myself. I started by going to cardio rehab, which led to going to a gym and getting a personal trainer, as well as doing Karate, has all helped me regain some semblance of my old life back.

Today I am down 46 pounds since my accident, but I still have a long way to go. I am happy to say that after losing all hope and not having any goals, I finally see a future for myself. My journey begins with LIVING.WELL MAGAZINE joining forces with The Biggest Loser Resort, and on September 30th, 2012, I will be on my way to The Biggest Loser Resort in Malibu, California. The goal: the team at the Biggest Loser Resort will develop a personalized wellness program that includes fitness, nutrition, and education tailored to my own personal needs, with consideration given to my heart failure, my lifestyle as a result of having heart failure and my personal capabilities, and even more importantly the camaraderie of fellow guests. I won’t be alone. I can’t fail with so many people involved in the process, trainers, nutritionists, and other professionals motivating and teaching me how to be successful in getting the rest of my weight off and returning to the care free, happy, and healthier person I once was.

Living Well Magazine readers, I’m taking you with me too. I will be documenting my journey through articles, Facebook, Twitter, images, videos, and other media resources. Since the auto accident and the diagnosis of heart failure, I have had little reason to feel inspired by much of anything, at times; it seemed hard enough just finding the will to wake up every day. Now I am looking forward to something, something life changing, The Biggest Loser Resort and me! I am ready for the next half a decade of my life to be a good one and not the nightmarish one that I will happily leave behind. Now I can play a part in the future of my health, giving me the chance to either get my heart into better shape and possibly even pumping normally or lose enough weight to become eligible for a heart transplant if needed in the future. At my current weight, if my heart stopped functioning altogether, it would be almost impossible to find a match for an appropriate size heart for a person such as myself.

Since being in my accident I have not been able to find any inspiration, it was hard enough finding the will to live, but for the first time in a long time I have found some inspiration, and that inspiration is me. I am ready for the next half a decade of my life to be a good one and not the nightmarish one that I have been through. My life is finally full of possibilities and I am ready!

Please join my journey with daily updates and progress reports. Feel free to send positive thoughts and energy my way on my blog and or Facebook. You can also watch for future stories about my journey in upcoming issues of LWM. My life is finally full of possibilities and I am ready! So who’s coming with me?