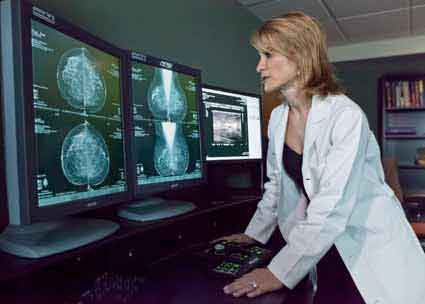 On the evening of Wednesday, March 9, 2011, I sat down with my family to watch television after a typical day at work. I’d performed ultrasounds and examined mammograms that day, as Director of Breast Imaging at Einstein Healthcare Network in Philadelphia, and reviewed some of my research into 3-D mammography.

Now it was time to relax and enjoy American Idol with my two sons. My husband was in another room.
When the strap on my camisole slipped off my shoulder, I reached over to put it back – and that simple gesture upended my life. I felt something in my left breast, something I hadn’t felt before, despite the self-exams I regularly performed in the shower. Uh-Oh, I thought. Something’s not right.

I left the room so I could check more closely in private. Yes, something was there. I called my husband to check it, too. Our lives were all about breast cancer. My father was an oncologic surgeon, my husband is a plastic and reconstructive surgeon, and I’m a diagnostician. Was I now stricken with the disease, too?

I promised my husband I’d follow up the next morning, but honestly – I’m not much of a worrier – it lapsed into the back of my mind until the next afternoon when I was doing an ultrasound on a woman in her 40’s who had a lump in her left breast. I was 47 and had a lump in my left breast. I finished the procedure and then had a mammogram, read by my close colleague, who then performed an ultrasound – which showed a mass. I immediately got a biopsy. Then I went back to work with ice packs in my bra.

The next day, a colleague called to tell me the results of the biopsy. She was crying. I was about to become what a similarly stricken breast doctor called a “dual citizen” of cancer: a practitioner and now, a patient.
I was stunned – but soon found myself comforting my family, colleagues and friends. That was the role I was accustomed to. I also quickly ramped up the quest for more answers. Did I have the BRCA or BRCA2 genetic mutation that raises the risk of cancer? If so, I’d opt for a double mastectomy. Had the cancer spread beyond my breast? If so, I’d need surgery and chemotherapy. I began a hurried round of tests, consults, doctor’s appointments.

I didn’t have the gene. The cancer hadn’t spread.

I was lucky to have found it early, lucky to have needed only a lumpectomy, radiation and Tamoxifen. I was lucky to have survived unscathed enough to continue my life uninterrupted. I missed one day of work after the surgery and none during treatment. I’d get radiation at 7 in the morning and be at work down the hall at 7:30. But I’m not the same person who sat down to watch TV that night six-and-a-half years ago.
The harrowing experience of having breast cancer provoked me to reorder my personal priorities and deepened my appreciation for the work I do. I’m committed more than ever to cancer research and am gratified that the clinical trials I conducted at Einstein into Digital Breast tomosynthesis helped lead to FDA approval and made 3-D mammography the diagnostic tool of choice. I’m now working with 13 other institutions on multi-center trials with half a million women, to show the benefits of 3D technology. And I foresee a future when advancing technology will enable us to individualize breast cancer treatment, based on age, family history, cancer type, and other personal factors.

And I use my experience to help my patients. I relate to them now with empathy, an intimate step beyond sympathy. I use my journey of recovery to bring my patients hope. My advice to them is considered more authentic because they know I understand the challenges they face. During my treatment, I had a patient who spoke only Polish. She’d had surgery and was terrified of getting radiation, perhaps for fear of being disfigured. I pulled aside my dress and said, “Look, I’m getting radiation every day now and here’s my breast.” Her eyes bulged out of her head. It was a remarkable moment.
I reassured her, through the Polish interpreter, that everything was going to be fine. I checked the next week and she was getting radiation.
Most of the changes have come in my personal life – but they didn’t happen right away. I barely had time to process my diagnosis because our family was in crisis; two of my husband’s best friends were dying of cancer. One of them died within six months of my diagnosis, and the other died a little over a year later. I was so preoccupied with them and their families and helping my husband and children that I didn’t allow myself the opportunity to sit back and reflect. But eventually, I did. 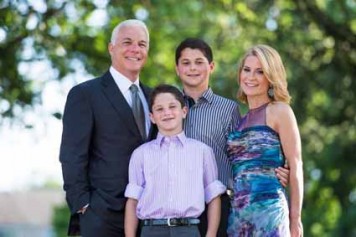 When I was younger, I was – a Deadhead. I was among the rabid fans of the Grateful Dead who traveled all over the country to attend their concerts. And I also loved horseback riding. But those joyful pursuits had been lost to me for many years, swallowed up in the chaos of medical school, marriage and motherhood, in the exacting demands of cancer research and a career in radiology.
The reminder of mortality made me realize how much I missed attending concerts and being an equestrian. So I bought myself a horse -- his name is Danny Boy and I call him Dan-Dan – and I ride weekends and some weekdays, too. And I’ve begun dragging my dear, accommodating husband all over the country and elsewhere to hear the remaining members of the Grateful Dead band. We’ve traveled to Mexico to see them – and we’re going back for their next concert there in February!

Sometimes, I still can’t believe I’m a breast cancer patient. It’s still not easy for me to say those words. But it’s not part of my thoughts on a regular basis even though it’s what I do every day. I think about it more often when I see someone who’s developed a recurrence and I think to myself, that could be me. But otherwise, I never wanted it to control or rule my life. That’s something I’ve tried to teach my patients, too. I don’t look to the future with fear and I don’t perseverate about my history.
Besides, I’m too busy these days riding Dan Dan and planning my next trip to see the Grateful Dead.

Einstein Medical Center Philadelphia Helps Pioneer Technology to Detect Cancer in Dense Breasts
Director of Breast Imaging and cancer survivor is the first patient to use it.

Nearly half of all women in the United States have dense breasts, which makes it difficult to diagnose breast cancer. New technology to be used in conjunction with traditional mammography significantly increases early detection of breast cancer among those women – and a prominent Philadelphia breast radiologist recently inaugurated its use at Einstein Medical Center Philadelphia.

Debra Somers Copit, MD, who was diagnosed with breast cancer six years ago, was the first patient to undergo the scan using the LumaGEM® Molecular Breast Imaging system at Einstein. All turned out to be well – for her, and potentially for the many other women with dense breasts.

“The technology is an exciting advance in our ability to diagnose breast cancer and I am so delighted that we have this new tool to offer our patients,” says Copit, Director of Breast Imaging for Einstein Healthcare Network. Einstein is the first hospital in Pennsylvania to use the new technology, and one of the few across the country. Copit’s earlier research helped advance the use of three-dimensional mammography – called tomosynthesis – which is the standard diagnostic method in use today.
Since dense breast tissue and cancer both appear white on mammograms, it makes it difficult for radiologists to distinguish between the two, so cancer can be masked by the dense breast tissue, resulting in false negatives or delayed diagnoses. Therefore, a secondary screening can be helpful to rule out the presence of cancer..
MBI works in an entirely different way from other diagnostic tools for breast cancer. The screening is done within one year of a woman having a mammogram, so the mammogram and this screening are done on two separate visits. MBI uses nuclear medicine, consisting of an intravenous injection of a short-lived radiopharmaceutical at a very low dose. After the radiopharmaceutical has been administered, patients are seated in front of the LumaGEM Molecular Breast Imaging system and the woman’s breasts are minimally compressed one at a time between two cameras which take a series of images. When the radiopharmaceutical is in the bloodstream, it accumulates in the cancerous tissue, highlighting the cancer cells during imaging. This makes it much easier for the radiologist to identify a tumor on the images.
A retrospective clinical study published in the August 2016 issue of the American Journal of Roentgenology confirmed MBI’s high incremental cancer detection rate: Gamma Medica’s LumaGEM Molecular Breast Imaging system was able to detect 7.7 cancers per 1,000 women screened that were not found using mammography. Approximately 85 percent of these cancers were invasive and 82 percent of the invasive cancers were also node negative, meaning they were detected at an earlier stage and presented a better prognosis. MBI is able to identify metabolic activity in these tumors despite breast density, which leads to an earlier diagnosis.

The procedure takes about 30 to 45 minutes and the radiologist reviews the images while the woman is in the screening room. If an abnormality is identified, a work-up is done the same day, such as a diagnostic mammogram or an ultrasound, in order to identify the problem.