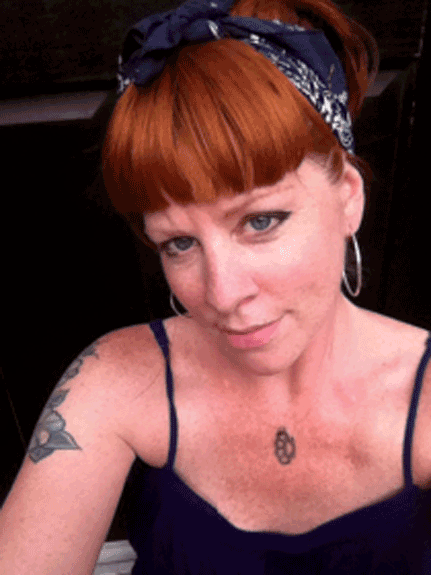 Tiffany Nardella was just 35 years old when she was diagnosed with Breast Cancer.

After college, I worked for a few years in the sexual health field with an emphasis on women's health. Since I had a heightened awareness of women's health issues, I took special care to make sure I had my annual exams and knew my own body.

Towards the end of 2009, I felt a lump in my right breast during a random self-exam.
With my background in women's health, you would think that I would have called the doctor right away. I did not. I thought it was probably nothing. After all, young women don't get breast cancer, so I decided to watch it. For three weeks I watched, and it did not go away.
When there was no change, I made an appointment with my general practitioner (GP) to have it examined. When my doctor felt the lump, she wasn't overly concerned, but agreed that we should have it checked out. She sent me to have an ultrasound and a mammogram.
The week before Christmas, I had my ultrasound. I went alone to the appointment; I wasn't expecting to have any more tests or to need anyone with me. After the tech completed the ultrasound, they told me they wanted me to have a biopsy of the mass. I was told I could have the test right then or wait until after the holiday. I figured since I was already in the office, and already taking time off of work, that I would have the test done.
Looking back, I wish I'd waited until I could have had someone with me during the appointment. I wasn't expecting the test to be painful and was surprised by how much pain I experienced. After the biopsy, I was sent to wait in another room until someone could talk to me about what to expect next.
Right after Christmas, I got the call from my general practitioner (GP). I was told I had invasive ductal carcinoma (IDC), stage 3, that was estrogen positive (ER+), progesterone positive (PR+) and Her2 negative. I'd been living in Philadelphia and working there since August 1997, right after college. I wasn't living near my family and I was in shock.
Since locally my boyfriend was the closest thing I had to family (we had been planning on getting engaged) I called him to tell him the news. I then called my mom and my best friend. I was afraid to give them such bad news. I was scared and trying to figure out how I would deal with this.

I wasn't exactly sure what to do next. When I received a call from the breast care navigator at the hospital, I was still in shock. She helped guide me in making the important decisions I was facing. She recommended a breast surgeon and even came to my first appointment with me. She really held my hand through the process since my best friend and family were so far away at the time. She was incredibly helpful.
Durig the first two weeks after I was diagnosed, I felt like I was in one doctor or another's office every day. In fact, I needed to take nearly two weeks off from work to go to every appointment. I was fortunate that I had a great job. I'd earned my Masters of Library Science degree and was working in the Philadelphia City Library system.
I truly enjoyed my job and worked at one of the busier branches. Though I had a stable job, I was still concerned about how much time I would need to take off. I was already burning through my paid time off and worried about all of the co-pays that would start to accumulate quickly. I tried not to take too many days off. I had a mortgage I was responsible for, and that concerned me.
I didn't want to be a sick person. I didn't want people at work to see me that way either. When I began treatment, my boss suggested I transfer to a slower branch but I wasn't ready to let breast cancer force me to take a back seat. My first chemotherapy regimen was physically challenging for me and did cause me to take some sick time.
When I was starting chemo and making decisions about the rest of my treatment and reconstruction, my long-term boyfriend ended our relationship. I was struggling with having been told I had breast cancer, figuring out how I was going to manage this news and then the person I assumed would be my caregiver suddenly disappeared. I needed to regroup.
Since I was a librarian, my first thought was to do some research. I went online and starting looking at websites for cancer organizations. One day I was using the group message board on the American Cancer Society website and someone posted that I should check out Young Survival Coalition's website and its community message boards. I looked into it right away. I was eager to talk to other young women who had also been diagnosed with breast cancer.
Through the online community on YSC's website, I found an affiliate group near me and went to one of its meetings. It was incredible to be in a room with other young women who understood what I was going through. People I didn't have to explain the vocabulary to or watch how much information I shared. These were strong women, some who had completed chemo, most of them working. They gave me encouragement and strength.
In addition to the support I received from the YSC group, my mom was able to come and stay with me twice, once during chemo and then again as I underwent my unilateral (single) mastectomy and began my Latissimus Flap reconstruction.
In the spring of 2010, I decided I needed more in my life than cancer. I was single now, and I pushed myself to start meeting people. I tried online dating, which led to a few nice evenings out, but no real connections with anyone. Just as I was about to close down my account, someone caught my eye. I decided to give it one more shot and to send one more email. I'm so glad I did.
I'd been leery of how and when to tell someone new about cancer. Dating is hard enough without having to throw breast cancer in the mix. This time, I wasn't leery. I was immediately upfront about it. My ex couldn't handle it. I needed any potential partner to know and make their choice. I decided to tell this guy that night.
He was wonderful, very understanding and didn't seem at all scared by the news. He became a willing caregiver as I underwent my reconstruction and continues to provide amazing support. We got engaged this year, and I'm looking forward to the years ahead with happy memories, hoping that much of the hard stuff is behind us.
Recently , I was married in May and live in South Philly with our 3 rescued pets. I am continuing to train for the YSC Tour De Pink; 3 years in a row! (It is a 200 mile bike ride fundraiser for YSC). My first Tour de Pink was 2 weeks after my last chemo. With hills! I am now an avid long distance cyclist, participating in many charity and group rides throughout the year which also is keeping me active and hopefully in good health.
I'm still a librarian, running the same branch and things are going great with work.
My biggest passion regarding breast cancer is to find a cure and to make sure that no woman goes through it alone. I also co-lead a local Philadelphia support group for Young survivors and will speak at schools and events in order to get the word out.

I am getting used to my "new normal" but in the back of my mind I find that the hardest part is worrying that my Breast Cancer will come back. I have made many wonderful friends throughout this process and unfortunately several friends have gotten a re-diagnosis. IT needs to end, it often feels like we are just waiting for who is next.