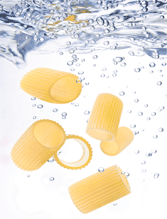 So he decided to start experimenting. True, it wasn’t as complex as, say, Mary Shelley’s “Frankenstein”. He didn’t need to have a huge, expensively outfitted laboratory and it was entirely legal, but, after all, it was the rule, the law. Whoever cooked pasta of any shape, any length, in less than 4-6 quarts of water?

Every recipe concurred. Being a voracious cookbook reader for too many years to admit, I have never seen lesser water quantities advised for this purpose. NEVER. So, TRADITION, obviously hit our fellow hard. In spite of his deep concern about the waste of water and energy, who was he to mess with centuries of Italian culinary history and culture. It would be like disrespect for Shakespeare’s “to be or not to be”, and then maybe McGee envisioned pasta feasts in the “Godfather” saga or “The Sopranos”, so he contacted two people he felt could pass ultimate judgment on his ideas.

Was it blasphemy or authentic scientific culinary creation, plus a serious meaningful energy saving idea?

He had already done many experiments and was anxious to have two of this countries best known advocates of Italian cuisine, Lidia Bastianich and Marcella Hazan, repeat them and hear their verdict. He wondered if anyone could, indeed, cook pasta using smaller amounts of water and energy and if so; how it would sit with the old school? He worked and waited.
McGee believes pasta can successfully cook in two quarts of cold water, burner on high to start, some stirring required and noodles need to be tossed with a little oil, most importantly, he felt the flavor and texture was ideal, but felt it was even better in cold water.

The women he consulted complied. They both experimented. Ms. Bastianich reported disappointment in loss of the nutty flavor, agreed to less water, but only a reduction from 6 quarts per pound to 4, and insisted on boiling the water first. Somewhat less water was tolerable to Miss Hazan, but she found the method harder work and didn’t plan to cook that way, but did not belittle it. To save energy would be more work, she realized. To save energy O.K.

So, our curious cook started working with hot water successfully, but reminds us of some stirring for short shapes and wetting with cold water and stir, stir, stir for a few minutes. Also rinse off any surface flour. I always break long noodles in half, they’re easier to cook, to serve and to eat, I think.

Now we come to the big payoff for Mr. McGee’s curious adventure in pasta cooking, the whole purpose of it- energy saving, and of course water saving, another part of the "Green epoch". The following figures are given in this article, admittedly, by McGee’s figuring, but he seems like a pretty swift guy to me. Feel free to check them out.

Americans cook about a billion pounds of pasta a year, so the minutes add up. Using as little water as possible, several trillion B.T.U.s are saved at the stove, 250,000 to 500,000 barrels of oil at the power plant, or $10 million to $20 million at current prices.

It doesn’t seem much these days when were hearing billions and trillions, but its money being spent trying to get back to more sane times. This is just one little thing we can do.
Our delightfully unconventional cook promises that the thickened and tasty water left in the pan after cooking whole wheat pasta particularly, but even with regular, will deliver a semolina flavored liquid that can be added to whatever sauce you make, as needed, for taste and creaminess.

How about you cook a pound of pasta you like, maybe fettuccine, break it in half and try the cold water method using 8 cups of water. Stir a lot. Sauté a lot of garlic.  Chop up some fresh herbs or parsley, a touch of crushed red pepper, bits of olive, pimento, etc., if you wish. When the pasta is just right for you, tilt your pan and spoon off all the liquid you can into a bowl.

Now add about a third of a cup of good olive oil, little more or less to your taste and calorie guide, add everything else, now add a little of the saved pan water and toss it all together. Pass fresh grated cheese. Yum! Have you made a little salad? Open red wine and toast McGee for this unusual and novel way to save energy.