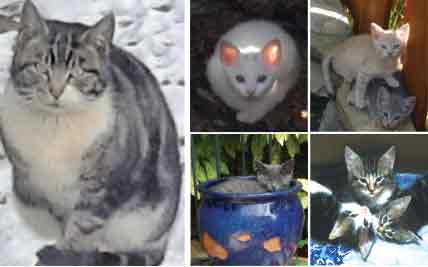 Sarah – she’s feral, the boys love her, and she’s fertile. For several years, she has blessed my backyard with litters of kittens birthed somewhere in the city and presented to me for feeding.
Nine lives go quickly here, but Sarah has beaten all odds, outliving her own broods that have died in traffic or that have simply disappeared. Sarah has been around for a while.

She appeared one cold rainy day, obviously pregnant, and then appeared another cold rainy day, obviously not. A few weeks later, I discovered her and six nursing fluffs resting in my neighbor’s yard on a discarded door. Though they were just inches away from my side of the yard, we were all separated by a cyclone fence, two gates, a thorny rose bush and some poison ivy.
In the past, I learned that numerous animal agencies had no time to take on more kittens, to trap Sarah, or to return my phone calls. By sheer serendipity, a force of life by which I live, I discovered one eager to take this litter. It was time for action.

Armed with an animal carrier, large boxes, newspapers, towels and cans of tuna, I began fishing for kittens. With tuna fish on the end of a fork that I poked through the fence, I was able to urge four of the kittens through a gap between the stone wall and the first fence pole and into my yard. I scooped them up and deposited them into the large boxes in the kitchen. Two kittens, however, hid in a tunnel under that discarded door and no amount of tuna could encourage them through that gap where I could reach them.

Knowing that ferals need to be socialized quickly I became the kitten whisperer to these four. Wrapped in little towels, they each spent time listening to my heartbeat, my breathing, and my constant prattle about what a tramp their mother was and my plans for their future. I gave them tuna fish and cat food slurries and tiny dishes of cream. I watched as they learned to eat, as their personalities developed, as they became friendlier, and as my kitchen became a mess. Who knew kittens were lactose intolerant?

On the appointed day, I dropped them into the carrier and deposited them at the agency. Workers came out from behind counters, cooing and marveling at the overload of cuteness and thankful for the monetary donation I left as well. One woman told me she was sure that these kittens would have new homes within 24 hours. Just imagine; new homes.
Back at the ranch, I discovered Sarah still on that old door nursing the only two she had left. She looked contented; she looked relieved.
I thought about opening another can of tuna, about grabbing a towel and giving this rescue business another go with the last two. But just as quickly, both kittens raised their heads, took one look at me, and scrambled for the dirty tunnel under the door, and just as quickly, these words raced to the forefront: you can’t save everyone.

It’s as true with people as it was with the ferals. Even when offered something better and brighter, some people just aren’t willing to take a risk and accept change. Even if they’ve meowed for help and hoped for a healthier, cleaner lifestyle, they will go back into that tunnel under the door. Why should they risk walking through that gap in the fence for a life that is easier and orderly when then can hide in their clutter where it’s familiar? Sometimes you have to let them be…and walk away.

Four kittens are going to know what love, warmth and softness feel like. They will learn to play and to purr. As for the futures of the other two – fear gave them a gamble when courage would have given them a guarantee.