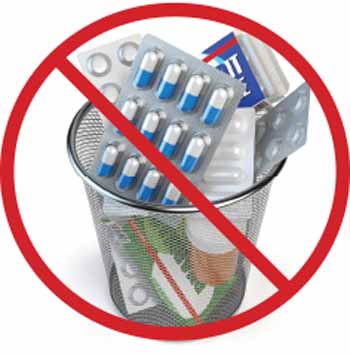 As recently as a few years ago, that was the default. But now pretty much everyone agrees it’s a bad idea, because some of the more than $230 billion worth of prescription drugs used by Americans every year will make it through the sewage treatment process and into the waterways. (The FDA still recommends flushing OxyContin, Percocet, morphine, and a couple of dozen other drugs so kids and pets can’t fish them out of the trash.

Mix medicines (do not crush tablets or capsules) with an unpalatable substance such as dirt, kitty litter, or used coffee grounds; Wrap them in a container and put them in your trash.
Recent studies have found that human drugs can disrupt the biology and behavior of fish and other aquatic critters at very low concentrations. “You can have measurable behavioral effects in fish and shellfish even at the parts per billion level,” says Christian Daughton, a veteran EPA scientist who studies how pharmaceuticals affect waterways. Some drugs apparently accumulate in fish over time: One study published in the journal Environmental Science found that male fish whose brains contained traces of Zoloft appeared less anxious. And while that might seem funny, these fish are also less effective at seeking shelter from predators.
The Pill is especially bad. True, synthetic estrogen-type hormones are not good for aquatic life. A 2010 study published in the journal Hormones and Behavior found that male Gulf pipefish exposed to estrogen in a lab for just 10 days developed some female traits. And while the altered males could still reproduce, female fish shunned them.
The easiest, and often safest, way to dispose of expired or unwanted mediation is through drug take-back or mail-back programs through pharmacies, government agencies and community groups, which will dispose of medications properly. Find a local take-back or mail-back program