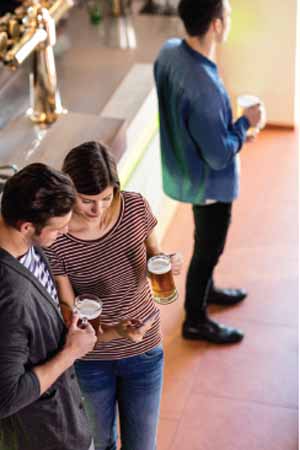 Technology has worked its way into every aspect of daily life. Technology has impacted everything from health to toys to “Infinity and Beyond.” The researchers of the future may consider our generation as an evolution point where smart phone and person have become one. Through sites like Twitter and Facebook, never ending conversations have been started about everything under the sun, as well as the sun. Trends come and go daily; one thing that was popular a week ago will be lost and forgotten one week later or less. In this article, we are going to be covering a topic that is near and dear to me, Beer. For American’s Friday

could be considered a national beer holiday after a long week of work. Technology has integrated itself into beer drinking too, with people choosing to drink more responsibly, more stylishly, practicing and sustaining better healthier life styles.
A topic of discussion that doesn't seem to be going anywhere is the effects of gluten on the body. There are varying opinions on this topic, but the consensus to date is that gluten is something many people can do without in their diet. Compelling companies to capitalize on the health trend by offering products that are gluten free. For those of you who are not familiar with the gluten-free concept, let me tell you a little bit about what gluten is. Gluten is a protein that is found in wheat and barley. For people suffering from Celiac disease or have gluten intolerance it can produce symptoms of stomach pain, gas, and nausea that do not go well with being out at the bar and drinking. Fortunately, there are beer companies offering products that adhere to those with gluten restrictions to enjoy drinking a beer occasionally too.
Beer is made from 4 basic ingredients: water, barley, yeast, and hops. Those ingredients are then fermented to produce the alcohol and the flavor. Upon arriving at the point in which the fermentation process occurs, is when the beer company must do something unconventional. By adding, a special enzyme called Brewers Clarex, to break the bonds of the gluten protein chain. This is what takes the gluten out of beer, making gluten free beer a good option for people who have allergies to gluten as well as those health conscious people who have simply chosen to eliminate gluten from their diet. Most beer drinkers have the mis-conception that gluten-free means flavor free. It isn’t true that gluten free diminish the flavor at all, in fact if someone gave you a gluten free beer and a regular beer I am pretty sure you wouldn’t be able to distinguish between the two. Fortunately, most gluten free beers maintain flavor giving the beer market a gluten free option that hasn’t eliminated flavor in the process.
Safety is an important aspect when going out with friends and drinking, alcohol can lead to making bad decisions, such as “Buzz Driving”. following an evening of drinking is a safety hazard to you the driver, passengers in your vehicle and everyone else on the road. It’s smart to insure your safety by pre-designating a driver to get you from point A to point B and home again. However, when it becomes clear that the designated driver didn’t remember they were the designated driver that’s when technology steps in. By using a portable breathalyzer before making their next move and driving.
The Breeze, is a portable wireless breathalyzer that fits comfortably on your key chain and connects directly with your smart phone. This allows the user to make a more informed decision about their current intoxication levels. Through the accompanying app, which tracks your drinking habits, it will let you know an approximate time in which you will be sober enough to drive. In cases where you can’t wait, the app allows you to connect with cab services or Uber to find a safe ride home. It will also suggest restaurants that are close by to let you wait until you get back to a safe blood alcohol content. If you need more than just food and time, it will also suggest local places that you can stay for the night. If you are a tech addict like me, enjoy going out and drinking, the Breeze could turn out to be not only a cool accessory and conversation piece, but it could save your life.
Let’s face it, there is nothing like a cold beer after a long week of work. After reading this article, we should be equipped with the knowledge and technology to enjoy beer healthily and safely. Please drink responsibly.