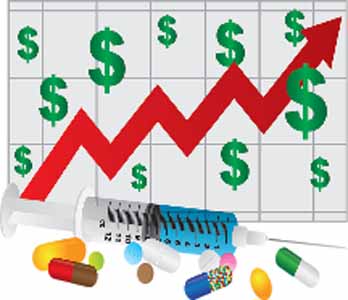 Are you angry with the American health care system? If so, you are not alone! It costs a fortune and many people question if they are getting their money’s worth. Even with countless “experts,” guidelines, task forces, and government agencies and interventions, Americans are sicker than ever and the costs continue to rise.
Reform is essential, but perhaps too much attention is placed on how to pay for it . Manage it, contain it, make the patient pay more, and raise deductibles are just a few of the common suggestions to solve the problem. In 2014, the U.S.A. spent $3 trillion or $9,523 per person on healthcare. With a number approaching the unfathomable threshold of $10,000 per person per year, it is understandable how focusing on the price tag has been stealing the spotlight. Truth be told, it’s not about the money! The problem stems from the very fabric of how the medical system treats disease and attempts to keep people healthy in the first place.
America’s problem is that doctoring has been transformed into the practice of dispensing. When was the Hippocratic Oath rewritten to read, “A pill for every ill?” How did this happen and who is responsible?

Pharmaceutical industry profits are enormous. In 2014, profits surpassed $1 trillion and are expected to climb past $1.3 trillion by 2018. It’s no accident that the pharmaceutical industry and its money has contorted health care in order to sell America (and the world) on their products.
We all know that drugs can be life-saving and are an essential tool at times, but our system over-relies on pharmaceuticals. Conditions that can be resolved by other means such as low-cost lifestyle treatments and natural approaches are overlooked or, worse, stifled. It is obvious that when Thomas Edison stated, “The doctor of the future will give no medication, but will interest his patients in the care of the human frame, diet and in the cause and prevention of disease,” he did not work for Big Pharma.

Will the grip of this trillion dollar industry ever loosen? If not, how will we as a nation regain our health physically, mentally and financially? From extreme advertising budgets to conflicts of interest in research, the challenge is great. Big Pharma is in control and is determined to keep it that way.
I know what you may be thinking, “This is a chiropractor talking. He practices drug-free healing, so of course he’ll be anti-pharmaceuticals.” I ask that you just don’t take my word for it, but read what others are saying:


“In 2012, the pharmaceutical industry spent more than $27 billion on drug promotion— more than $24 billion on marketing to physicians and over $3 billion on advertising to consumers (mainly through television commercials). This approach is designed to promote drug companies’ products by influencing doctors’ prescribing practices.”


“Among the most prevalent conflicts of interest are those arising from physicians’ interactions with drug company sales representatives, or “detailers.” Pharmaceutical companies employ about 90,000 detailers... to market their products to physicians” Journal of the American Medical Association

“Over the past two decades, the pharmaceutical industry has gained unprecedented control over the evaluation of its own products. Drug companies now finance most clinical research on prescription drugs, and there is mounting evidence that they often skew the research they sponsor to make their drugs look better and safer.”

“It is self-evidently absurd to look to investor-owned companies for the unbiased evaluations of their own products." “One result of the bias in this literature is that physicians learn to practice a very drug-intensive style of medicine. Even when lifestyle changes would be more effective, physicians and their patients often believe that for every ailment and discontent there is a drug.”


“Conflicts of interest may bias more than research. They may also affect influential guidelines issued by professional and government bodies, as well as decisions by the Food and Drug Administration (FDA).”


“[T]his advertising promotes only the most expensive products, it drives prescription costs up and also encourages the ‘medicalization’ of American life — the sense that pills are needed for most everyday problems that people notice, and many that they don’t.”

The above quote is in reference to direct-to-consumer advertising of pharmaceuticals (the practice allowing drug companies to promote their prescription products directly to patients). The U.S. and New Zealand are the only two industrialized nations that allow such practices.
Robert M. Centor, MD, Director of the Division of General Internal Medicine at the University of Alabama

“Direct-to-consumer drug advertising works very well – for pharmaceutical company profits, but not for the public health...”

Dr. Angell, the first female editor-in-chief of the New England Journal of Medicine

“Breaking the dependence of the medical profession on the pharmaceutical industry will take more than appointing committees. It will take a sharp break from an extremely lucrative pattern of behavior.”

I did not write this article with the objective of shaking the trust you have in doctors or causing you to fear the medications that may at times be necessary. It was designed to open your eyes to a system that is overly influenced by an industry that has much to gain by maintaining a lucrative status quo and your belief that pills are the only answer. Saving America from the current health care debacle and unsustainable cost starts with consumer awareness.
Only with awareness you can make the best choices for your health, question authority (both political and private), better scrutinize advertisements, and demand an end to conflicts of interest. With every little step, the grip will loosen. Not only does your health depend on it, but so does the financial future of our country!

Dr. Scott E. Rosenthal is a second-generation Doctor of Chiropractic and a past president of the Delaware Chiropractic Society. His undergraduate degree is in Nutrition and he is a Certified Yoga Teacher. In his Wilmington practice, he offers the cutting-edge Koren Specific Technique (KST) as well as other contemporary and traditional approaches. KST comfortably integrates gentle adjustments of the spine, cranial bones, TMJ, arms and legs (including the wrists and feet). Dr. Rosenthal specializes in pain relief, auto or work injury recovery and natural ways to boost whole body wellness. To contact Dr. Rosenthal please visit rosenthalchiropractic.com or 302-999-0633.
< Prev Next >