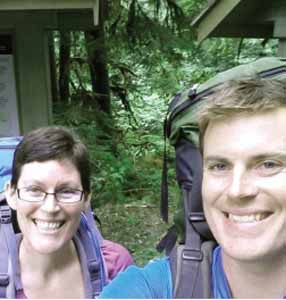 "Women are taught to look for lumps, but my “lump” was better described as a firmness, more akin to superficial inflammation than an embedded lump.  Women are told to have a mammogram to investigate abnormalities, but radiologists told me that my abnormality looked normal on the screen.  Women are told to visit with a surgeon to inquire about a biopsy, but my first surgeon told me that a biopsy was not needed because I did not have cancer.  After 18 months with an undiagnosed firmness, and at my spouse’s urging, I made an appointment with a new surgeon who was willing to perform a biopsy.  Within two days of the biopsy I had the answer of IBC. If I hadn’t been so persistent in seeking a diagnosis, where would I be now?  I was my own best advocate toward getting the help I needed."

My hair is always the first part of my body to know that I have cancer. With each diagnosis, I made arrangements for someone to cut it and give it a cute albeit temporary style before the chemotherapy forced it out of its follicles. The first time I was diagnosed with breast cancer, my sisters’ friend gave me a pixie cut in the kitchen. The second time, I gave my young daughters the scissors and told them to have fun. After each cut, the hair follicles ached as they were bent in new ways, springing up with foreign lightness. It is this feeling on my scalp that affirms that I am not dreaming, that the course cannot be altered, that the reality of cancer is upon me.
I was diagnosed with stage III inflammatory breast cancer (IBC) four days before my thirtieth birthday. I had felt a firmness in my left breast for 18 months, but since I was breastfeeding my second daughter at the time, various medical professionals told me it was a clogged duct. Or something unknown, but certainly not breast cancer. When the lump persisted after I finished breastfeeding, I found a new surgeon who was willing to perform a biopsy. While he was retrieving the biopsy sample and I was still on the procedure table, he told me that the tissue looked good and there was nothing to worry about.
Until his nurse called me at work the next day. You have cancer. Go to the clinic. You have an appointment with an oncologist. Wait as long as necessary to speak with her.
Thus began my journey with breast cancer six years ago. My daughters were merely 1 and 3 years old.
At first I had so many questions that I didn’t know where to begin. What does Her2 positive mean? What is the prognosis for IBC? Why had no one detected the IBC? What is going to happen to me? After chemotherapy started, my brain became too cloudy to hold on to new questions that sprung up in between doctor’s visits, so I started jotting my questions down in a notebook and bringing it to my appointments.
Asking questions helped me to develop a strong relationship with my oncologist. We built a mutual trust that we were both fully invested in treating my cancer. My questions demonstrated to her that I was an active, rather than a passive patient, eager to do everything in my power to help her help me. Although I hated having an oncologist in my life, my gratitude for her expertise and care became boundless. This made it easy for me to bring love and frankness and honesty and positivity to my appointments, further facilitating my treatment.
Treatment for my Her2 positive IBC required six cycles of chemotherapy, left-breast mastectomy, and 3-weeks of twice-daily full chest wall radiation. Together, these treatments took six months. I had been a band geek in high school, not an athlete, but I nonetheless found it useful to think of these phases of treatment as quarters of a long, cancer-fighting game. My beloved oncologist was the quarterback, coordinating all of the other specialists to scan me and poke me as they strategized how to get the cancer out of my body. I was the ball. I just needed a little help getting across the goal line.
It took me a long time to not feel personally jilted by the IBC diagnosis. Women are taught to look for lumps, but my “lump” was better described as a firmness, more akin to superficial inflammation than an embedded lump. Women are told to have a mammogram to investigate abnormalities, but radiologists told me that my abnormality looked normal on the screen. Women are told to visit with a surgeon to inquire about a biopsy, but my first surgeon told me that a biopsy was not needed because I did not have cancer. After 18 months with an undiagnosed firmness, and at my spouse’s urging, I made an appointment with a new surgeon who was willing to perform a biopsy. Within two days of the biopsy I had the answer of IBC. If I hadn’t been so persistent in seeking a diagnosis, where would I be now? I was my own best advocate toward getting the help I needed.
Since that time, I have only improved at listening to my body and pursuing answers even when healthcare professionals suggest there are none. It was by listening to my body that I hastened the diagnosis of my second breast cancer. I found a small, dime-sized lump in my right breast about two years after completing treatment for my first breast cancer. Just like before, the radiologist looked at the images and told me there was nothing unusual on the screen so I should watch the breast for changes over the next several months. When I shared this with my oncologist she looked at me over her glasses, dumbfounded, because clearly we weren’t going to do that again. Within a week I found my way to a procedure table at a different institution, chatting with a different radiologist about how I no longer gamble with lumps as she plucked a sample from my breast. She was neither the first nor the last person to applaud my bravery. I’ll take a little biopsy over undiagnosed breast cancer any day.


This time I was grateful to be at home instead of work when I got the cancer call. My surgical oncologist called me at dinner time; I left the table and found solitude in the bathroom. The empathy and sorrow in her voice was palpable as I sat crumpled over the edge of the bathtub, my teardrops making tiny dark puddles on the bath mat. Like all of the other times a physician has called me at home, she ended by asking if I had any questions. Like the previous cancer diagnosis, the answers couldn’t come fast enough.

This time it was not IBC but ductal carcinoma in situ (DCIS). The difference between these breast cancers is in their location—IBC is in a layer of the skin over the breast, whereas DCIS is in a duct of the breast. Key to determining the course of treatment for any cancer is knowledge of the receptors on the cancer cells. Both my first and second cancers were Her2 receptor positive, meaning these cells make more of the Her2 protein compared to non-cancerous cells. This is important because it told me that I’d be undergoing anti-Her2 therapy again. So, even though I had two different types of cancer, my chemotherapy was to be very similar because my two cancers had the same receptors.
One other thing was different this time. A full-body scan for cancer (using positron emission tomography, PET) showed glowing dew drops on the spider’s web of my lungs, revealing possible breast cancer metastases in my lungs. This suggested that the cancer was not contained in my breast, and so the stage of my cancer was declared to be stage 4: the most severe stage. The metastases were too numerous to count and too small to biopsy, and so the pulmonary oncologist had no advice to give. We pursued the treatment of the breast cancer and hoped for the best with the spots on my lungs.
So, we did it again. My oncologist guided me through six months of chemotherapy, consisting of nine cycles of chemicals selectively killing parts of me. After chemotherapy, I had a right breast mastectomy. The decision to undergo this mastectomy was wrought with controversy because there are conflicting data regarding whether or not to remove the breast cancer when it is thought to have metastasized to other organs. I consulted with several oncologists, and none of them gave me a strong recommendation. They put the decision in my non-expert hands. I was left with no choice but to trust my instincts, and my instincts were shouting at me to remove the object that had brought the cancer upon me once again. The breast had to go.

After surgery there was no radiation, but I was prescribed long-term anti-Her2 therapy. I continue to take anti-Her2 infusions every three weeks, and the amount of time prescribed for these treatments is “indefinitely”. At first the word indefinitely sounded ominous because it implied that I’d have cancer indefinitely. I was afraid of having cancer forever. Yoga and meditation have helped me to overcome this fear because it served no purpose in my life. It didn’t make cancer treatment go away, or be less painful, or protect my loved ones. Fear only brought anxiety and anger, frustration and fatigue. I found the places in my body where I held the fear tightly and learned to breathe into those places to release the fear.

In addition to yoga and meditation, writing has been an essential outlet for releasing my emotions. I chose to make my writings public in a blog, which also served to disseminate information about my progress without the need to make dozens of difficult phone calls to friends and family.

Now I am 2 years past my second mastectomy, and I am NED—no evidence of disease. NED is the closest medical declaration for “cured” that will ever be handed to someone with stage 4 breast cancer. Indefinitely, now, is lovely. Indefinitely stretches out before me, three weeks at a time, as the anti-Her2 drips into my bloodstream and prevents new cancer from emerging. Indefinitely includes chaperoning my daughters’ elementary school field trips, gardening with my husband, hiking with my brother, and traveling around the world to give presentations on microbiology. That which used to scare me now empowers me. Indefinitely.

Do you know how long you will live? Neither do I. There are no data to inform my prognosis. The survival rates are poor for Her2 positive cancers, pretty awful for IBCs, and positively abysmal for stage 4 cancers. But one of my anti-Her2 drugs has only been on the market for a few years, so there are no data on long-term survival rates for patients who have been treated with this drug. I am generating the data with each breath. Because of this, no doctor can project how long I will live. That makes me not so different from most people. And we all have so very much living yet to do.

Heather K. Allen is a two-time breast cancer survivor before the age of 35.  She is passionate about empowering cancer patients to be their best selves and walking her kids to school.  For her day job she applies her PhD in microbiology to study swine gut bacterial communities.  Visit Heather on her blog, www.carnations.blogspot.com.
< Prev Next >