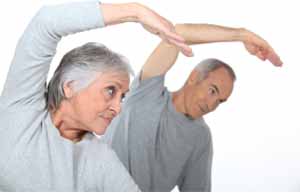 As people age, some regions of the brain begin to shrink. Studies show the hippocampus shrinks one to two percent annually in people without dementia — a loss that is associated with an increased risk for developing cognitive difficulties. This is drawing much interest to the importance of exercise for the aging brain, and how it can alter brain health.
We’ve known for decades that the right kind of exercise burns fat and builds muscles. Recently, a study was published in The Journal of Alzheimer’s Disease, suggests that a moderate exercise regimen in individuals 65 and older can build gray matter. Gray matter consists mostly of neurons and is generally equated with greater brain health!
While exercise has long been linked to better mental capacity in older people, this study was unique in that it included 10 years of data from nearly 900 participants who completed medial and cognitive tests and received M.R.I. brain scans. The participants were at least 65 when they entered the study, which included an estimated number of calories burned through weekly exercise.

How Much Exercise is Needed to Make a Difference in the Brain?

The participants in the study engaged in such activities as moderate cycling, gardening, walking, jogging, and ballroom dancing as part of their lifestyle regimen. Among the participants, the top quartile of active individuals showed substantially more gray matter in the parts of the brain related to memory and high-level thinking. And those whose activity increased over a 5-year period showed notable increases in gray matter.
The benefits of physical exercise, especially aerobic exercise, have positive effects on brain function on multiple fronts, ranging from the molecular to behavioral level. According to a study done by the Department of Exercise Science at the University of Georgia, even briefly exercising for 20 minutes facilitates information processing and memory function.
This is great news considering the global incidence of dementia is estimated to more than triple in the next 35 years due to the swell of aging population and increased life expectancy. If  physical conditions permits, moderate aerobic exercise should be a component to every aging individual’s care plan.