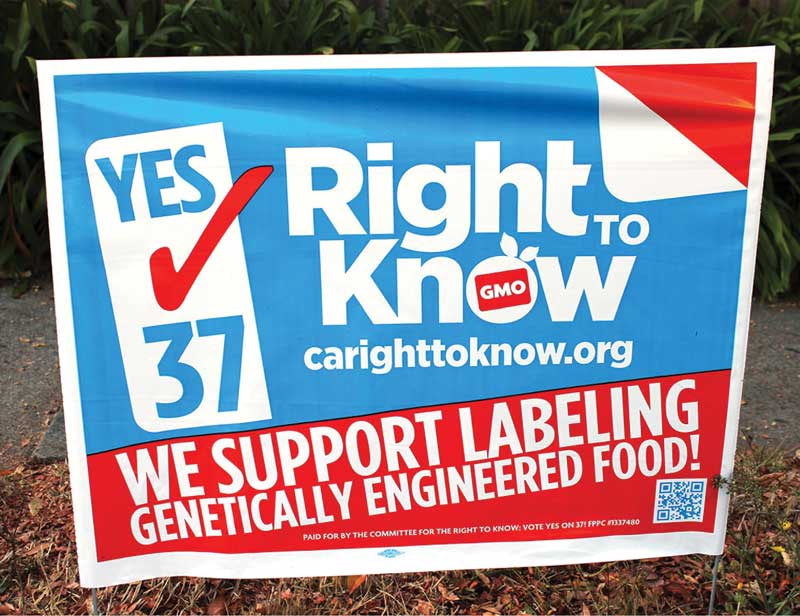 Please tell us what we are eating!

Proponents of genetic engineering (GE)—whereby DNA from unrelated species is combined to produce improved or novel organisms—insist that the benefits of increased crop yields and less agricultural waste outweigh the potential risks, but many environmental and public health advocates aren't convinced.
According to the Union of Concerned Scientists (UCS), one risk of GE is that our new "frankencrops" could become invasive, toxic to wildlife, or dangerous in other as-yet unknown ways. "But the most damaging impact of GE in agriculture so far is the phenomenon of pesticide resistance," reports UCS, adding that millions of acres of American farmland are infested by weeds that have become resistant to Monsanto's popular herbicide glyphosate (known to most by its trade name Roundup). "Overuse of Monsanto's 'Roundup Ready' trait, which is engineered to tolerate the herbicide, has promoted the accelerated development of resistance in several weed species."

As a result, farmers are now turning to older, more toxic herbicides—and agribusiness companies are responding in kind with new rounds of GE crops engineered to tolerate these older chemicals. UCS worries that the process repeating itself is only leading us down the path of plants evolving quickly to overcome our defenses however technically brilliant they may be.

As for health risks, UCS acknowledges that eating refined products derived from GE crops is unlikely to cause health problems, but maintains that inserting a gene from one organism into another could still have unintended health consequences. For example, those with food-borne allergies could be at increased risk for reactions given the combination of genes in what looks like any other vegetable or piece of fruit. "This phenomenon was documented in 1996, as soybeans with a Brazil nut gene—added to improve their value as animal feed—produced an allergic response in test subjects with Brazil nut allergies," reports UCS.

Given these risks, some 21 countries and the European Union (EU) have instituted policies requiring foods created with GE technology to be labeled as such so consumers can know what they are buying and putting into their mouths. EU rules mandate that if any ingredient in a food has 0.9 percent or higher of genetically modified organisms, it must be marked accordingly on its packaging. Environmentalists in the U.S. would like to see the federal government put in place a similar policy—research from the non-profit Just Label It found nine in 10 Americans to be in favor of mandated GE labeling—but lobbying interests from agricultural states with a vested interest in selling more GE products still hold lots of sway over elected officials. So for now, Americans concerned about what's in their food will need to do their own homework regarding what's safe to put on their dinner tables.

Luckily some natural foods retailers are making it easier for consumers intent on avoiding GE foods. Whole Foods, for one, is working toward full disclosure via labeling in regard to which of the foods on its store shelves contain GE ingredients. While Whole Foods may be a pioneer in this regard, environmentalists are hoping other U.S. grocery store chains will follow suit so that Americans can decide for themselves whether or not to take the risk of eating GE foods.

CONTACTS: UCS, www.ucsusa.org; Just Label It, justlabelit.org.
EarthTalk® is written and edited by Roddy Scheer and Doug Moss and is a registered trademark of E - The Environmental Magazine (www.emagazine.com). Send questions to: This email address is being protected from spambots. You need JavaScript enabled to view it..
< Prev Next >