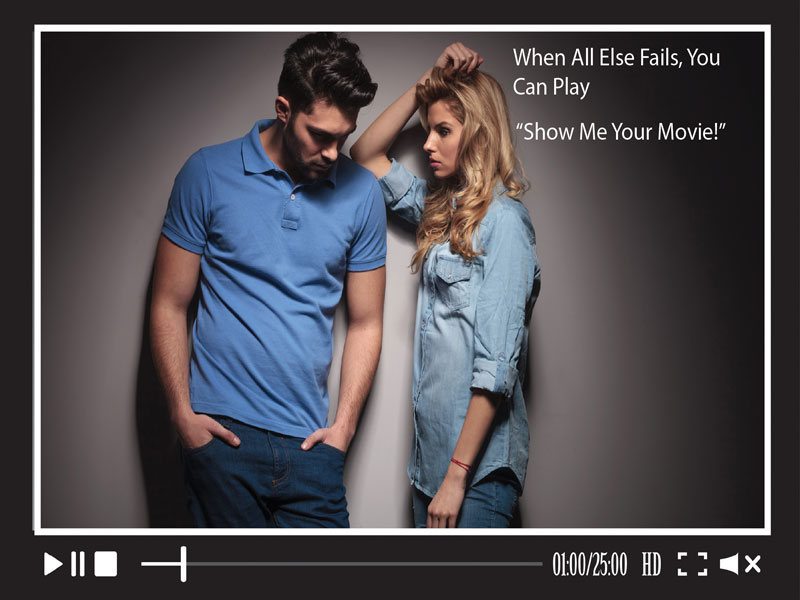 Maggie saw Jim kick the family dog. His foot firmly connected with Grover's belly, sending him into a humiliating skid on the kitchen floor. The dog yelped and peed on the floor but he wasn't injured. Maggie was shaking with anger and a little bit of fear. It was bad enough that Jim had been yelling at her, but now he was abusing their dog? He would pay for his lapse in judgment, but right now she just wanted to get away from him. She stormed out of the kitchen and slammed the door to her bedroom.

Later that evening, she approached Jim in the family room while he was channel surfing. "We need to talk," she intoned. Jim looked rather sheepish but he agreed. Tears began streaming from Maggie's eyes as she expressed her shock and dismay that Jim would take his frustration out on Grover. As Jim listened to Maggie's recounting of what happened, he was horrified. How could she think he would do such a thing? "I did no such thing, Maggie! I merely yelled at Grover. I realized that was the wrong thing to do when he peed, but all I did was yell!" Jim was adamant that he would never touch any living thing out of anger, let alone kick a defenseless dog. How could Maggie attribute such a despicable action to the man she claimed to love? Jim was inconsolable at the thought.

Needless to say, since Maggie and Jim could not agree about what happened earlier that day in their kitchen, there wasn't much they could do but continue to argue about who was right and who was wrong. It devolved into an argument that would last for years and never be resolved. Whenever another conflict arose, it always came up.

Does this sound familiar? Have you ever had the experience of recalling events completely differently from the way someone you are close to remembers it? Have you felt utterly shocked by a close friend's, family member's or romantic partner's version of what happened? You remember what happened in detail yet it seems like this other person whom you usually trust and feel close to is suffering some sort of memory lapse. You are sure they are sane but in this moment they seem to be having a severe leave of their senses.

Most of us have experienced some version of this many, many times. It is a huge issue for couples. She is certain he said or did one thing, while he swears he said and did something different. He knows it is her fault, but she can recall every single thing he said and clearly he is to blame. This dynamic is so common in couples we refer to it as "He said, She said." And yet, few of us know how to sort out the facts in a way which satisfies both parties. How can this all too frequent rift in partnership be solved?

This may sound insane but when all else fails, you can play a game! Not just any game, but a very specific game. I refer to it as "Show Me Your Movie" and my partner introduced me to it. He has an advanced degree in psychology and although he doesn't seem to think that counts for much, I find that his educated insights often produce the most delightful strategies for solving interpersonal conflicts. At his prompting, I learned how to play "Show Me Your Movie" when we were experiencing a complete departure in our versions of "what happened." Rather than allow our interaction to follow the all too common path of trying to "convince" each other that our version is the "right" one, we played this game. The end result was beautiful! Our hearts opened as we laughed and cried and experienced each other's version of reality as if we were watching a movie. We felt connected at the heart again and somehow "who was right" didn't seem as important anymore. In fact, we could forgive each other for seeing things differently.

Would you like to try this game? Next time you get into a deadlock with your partner or someone else that you are close to, try this:

1. At Home, Forget the "Facts!" ONLY Feelings Matter

Few people are able to agree on what is or is not a fact. Intelligent and well-meaning people disagree all the time. And yet, a lot of people attempt to "prove" they are right and the other guy is "wrong." The fact is that our feelings shape our perceptions, and so even when you are attempting to be logical and factual, you probably are less so than you think.

And no matter how much you may enjoy "winning" debates, your home is no place for such displays. In intimate relationships, "winning" an argument translates to losing the love we want. Each time we "prove" our partner "wrong," we ultimately lose because we fail to acknowledge our partner's valuable contribution and we diminish their role in the relationship.

While I recommend that you cultivate a preference for feelings over facts in general, you may not be ready to make such a sweeping change. In that case, you can at least agree that for the sake of this game, what's most important isn't the "facts," but the feelings. So find the feelings, yours and your partner's, and allow that to take center stage.

Agree who will share their movie first. While your partner is recounting their version of what happened, don't think about anything else, just immerse yourself in their experience and allow their emotions about their story to touch your heart. Then when they are done, express your empathy and identification with their story. See if you can describe their experience from their point of view.

Once they feel totally heard and understood, ask if they are ready to hear your movie. If they are ready to listen with empathy and enthusiasm, or at least curiosity, you can share your version of what happened. But be careful to tell it like you were telling it for the first time and avoid anything which smacks of asserting that your version is the "right" one. For instance, don't say things like "I know for a fact." Instead, say things like "In my movie, what happened was . . ."

When listening, suspend your critical observations and allow yourself to get pulled into your partner's story as if you were sitting in a movie theatre allowing the story to sweep you away and impact your emotions. Laugh, cry, get caught up in the storyline without trying to figure out how your partner's reality might impact you. At the points where their "movie" differs from  your own, you may be tempted to shut down, but remember partnership is better served when we are able to perceive conflicting viewpoints simultaneously. Become an impartial observer as well as an enthusiastic movie-goer!

Most importantly, don't try to solve the conflict or come to an agreement about what did or did not happen, and what should or should not be done about the disagreement. For now, at least, focus on connecting at the heart level and feeling your partner's emotions in your own body.
Too many of us try to "solve" our conflicts instead of connecting empathically with the emotions. What happened is in the past. What matters is how we want to live moving forward. And what really defines an intimate relationship is the quality of the heart connection. We can tend to forget that when we are bent upon "winning" an argument. But "winning" only corrodes our relationships. What we need is understanding and emotional safety.
If you have any trouble playing this game, it might help to have a third party who is experienced with the process guide you a few times until you get it. This is just one of the many techniques I teach the couples I work with so they can enjoy each other more fully. Location is no barrier. I do this work over the phone just as effectively as I do in my Northern California office. Give me a call, text me or drop me an email. Let's play Show Me Your Movie!

Veronica Monet, ACS, CAM: Author, Couples Consultant and Radio Host
Veronica Monet's perspective on sex, anger and relationships may challenge your old beliefs but you are sure to find her insights uniquely helpful to your personal life. Veronica is a highly visible spokesperson for sexual rights and has appeared on every major network as well as CNN, FOX, CNBC, WE, A&E and international television programs. She has been profiled in many publications including The New York Times and has lectured at a variety of academic venues including Kent State, Stanford and Yale Universities. As a Certified Sexologist (ACS), Certified Sex Educator (SFSI), Certified Anger Management Specialist (CAM), and a Trained Volunteer for the Center Against Rape and Domestic Violence (CARDV) Veronica Monet coaches clients over the telephone and in-person at her Northern California office. You are invited to contact her at This email address is being protected from spambots. You need JavaScript enabled to view it., call toll free at 888.903.0050 and listen to her online radio program, The Shame Free Zone, at http://www.sextalkradionetwork.com
< Prev Next >