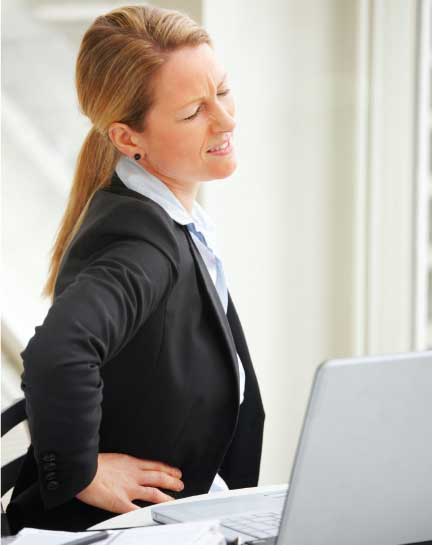 Yes, you ARE a victim of the modern age! You spend much of your day banished for hours sitting in traffic, locked and chained to a work station or your home computer, and captivated on the couch watching TV. Your body is sustained in awkward positions. Your posture is crooked, compromised and fatiguing. Your neck cocks forward, causing your muscles to grip desperately to the back of your skull. The bands of connective tissue and muscles in your pelvis shorten and tighten for hours while you sit oddly perched on a chair. When the day brings needed breaks to your sedentary punishment, you suffer the results. Standing slowly, you teeter to a balance. Your body rebels against further movement.

Like millions of people in your predicament, you suffer from pain in the arms, wrists, hands, feet or legs.
Is your pain NOT going away? Despite the many attempts to relieve your symptoms with pills, vibrating massage gadgets, evergreen-smelling icy hot creams and daily, reluctant rubs from an impatient loved-one, nothing helps. Enough is enough!
A quick visit to your physician leads to a trip to the drug store where you receive a goody bag of strong pills and high hopes. Like many, you run through the course of medication and still find that the pain returns. Frustrated, concerned and hurting, you return to your doc’s office. This time he sends you off to the specialist. After a steroid injection or two, your pain is finally gone... but, again returns. This result is of no surprise. Research on steroid injections for common chronic shoulder and elbow problems revealed that “no long-term benefit was shown.”1
Months go by and you have waited-to-see, swallowed tummy-irritating pills, spent weeks smelling like a fresh-cut Christmas tree, wore out the hands of your partner (who now, incidentally, has carpal tunnel syndrome from giving you too many massages), have been to this doctor and that doctor, wished really, really hard, but the PAIN PERSISTS!
“ NOW WHAT?” you ask? I have the answer! It may surprise you? Time is of the essence- Go to the chiropractor!
Failed treatment is too often the result of how your condition was viewed. Pain in a joint such as the knee or elbow is treated separately, as if the knee or elbow is not attached to the rest of the body. In chiropractic, we view the body in a holistic manner. We look at the whole person. Your arms and legs are integrated systems, dependent on each part working together. For example, the knee can only work properly if there is normal hip and ankle flexibility. The same goes for your upper extremities. By addressing each part individually and then as a system, pain is relieved and better function returns.
Take Jayne, for example. She came into my office with chronic wrist pain. Like so many of you, Jayne tried many treatments to no avail. I evaluated her wrist and found that several of the bones were fixated and moving incorrectly. Looking further, I found other common layers of issues that accompany this popular malady. Her lower neck bones were misaligned, resulting in abnormal tensions in the muscles that connect from the neck region to the upper extremity at the shoulder. There was damage to the nerves coming out of the lower neck. These nerves affect the regions from the shoulder to the fingers. Jayne’s elbow also had a twisting misalignment. She had torsion and tensions in her myofascia (sheath-like connective tissue that surrounds, binds and separates muscle). Although she had no pain in the neck, shoulder or elbow, I expected and later identified several sore spots in those areas during palpation.
Starting with the neck, I gently adjusted the misaligned and fixated joints. Next the shoulder was cleared, then the elbow, and finally the wrist. Several fingers also required tiny adjustments. Starting with the neck again, another pass was made down to the hand, releasing the connective tissue and muscular components. Jayne’s wrist improved immediately and later resolved after several weeks of care. She was able to again hold her daughter without pain and returned happily to the tennis courts.
At times, the global approach is required to be more global. It is not uncommon to find a part of the body responsible that would appear unrelated. One example involves the hip and the wrist. Often the large pelvic bones of the hips become misaligned in a downward and backward direction (the same direction one pushes a wallet into the back pocket). When this occurs, the latissimus dorsi muscle, which attaches between the hip and the humerus (arm bone), can become tight. This results in a pulling of the upper arm and can lead to a cascade of abnormal mechanics in the shoulder, elbow and wrist. Run the body for several weeks or months on this faulty system, and a painful breakdown can occur. At times, patients feel wrist or shoulder relief when the hip misalignment was corrected, and before the upper extremity was even touched.
A strategy that includes a full evaluation and treatment of all tissues and regions involved is essential if long-term results are to be appreciated. Pills and needles may have their place and can temporarily reduce symptoms, but they can’t move bones! The chiropractic approach goes beyond the back. It can bring much needed relief to all parts of your body that suffer from pain and dysfunction. Since it is unlikely you will leave the traffic jams and poor postures of the modern world and move to a remote cabin in the Himalayas, visit the doctor of chiropractic. Then get back to your work station... but this time, with lasting comfort!
1 Ann Rheum Dis2009;68:1843-1849 doi:10.1136/ard.2008.099572