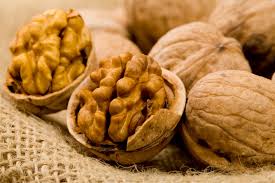 According to greek legend, when the gods walked upon the earth, they lived on walnuts. It’s no wonder why they did. As an excellent source of omega-3 fatty acids and antioxidants walnuts have many potential health benefits.

Walnuts are an exceptionally good source of omega-3 fatty acids, a special type of fat the body cannot manufacture. Numerous studies have demonstrated that people who consume a diet rich in omega 3 oils have a significantly reduced risk of developing heart disease. Specifically, Omega 3 fatty acids help to reduce artery clogging plaque from forming within the walls of coronary arteries.
These important fatty acids also impact the healthy functioning of nerve cells. A relative deficiency of omega 3 oils leads to the formation of cell membranes that are much less “fluid” than normal, which can ultimately affect behavior, mood and mental function. In fact, decreased consumption of omega 3 fatty acids has been correlated with increased rates of depression.
Walnuts also contain polyphenolic compounds which are powerful antioxidants and inhibit free radical damage to LDL cholesterol, further reducing the possibility of plaque formation.
Add Walnuts to your Daily Diet
Despite the significant health impacts, an estimated 60% of Americans are deficient in omega-3 fatty acids. The good news is that increasing YOUR body’s supply of healthful omega 3 fatty acids couldn’t be any easier - just toss a few walnuts into your morning oatmeal, or your dinner salad, or grab a handful as a quick afternoon snack.