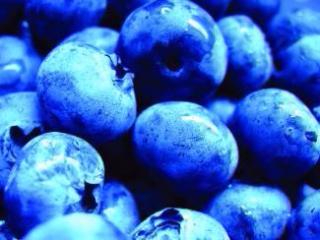 Fresh, ripe blueberries are bursting with flavor, loaded with nutrients and low in carbohydrates. They are high in vitamin C and potassium, are a source of vitamin E and important trace minerals, especially manganese and selenium.  Blueberries are a good source of dietary fiber. In addition to their nutritive value, scientists are discovering the tremendous anti-aging, and health protective benefits of blueberries.  These benefits are discovered in the very attribute that gives blueberries their sensory appeal – their color.

The blue pigments that give blueberries their color belong to a family of compounds called anthocyanins. Blueberries contain at least 25 different anthocyanins. Anthocyanins are part of a larger family of compounds called flavonoids. This large category of water-soluble plant compounds number in the thousands. They are characterized by several carbon ring structures joined together in each molecule. The ring structures contain many unsaturated carbon-to-carbon bonds, and are therefore flush with high-energy electrons. These highly reactive ring structures function as sunscreens and anti-oxidants for the plant. They absorb sunlight and protect the plant from destruction from burning up from excessive light energy. When we eat flavonoid rich foods, they do the same for us – they protect our cells from excessive oxidative damage. In addition they work with other nutrients, such as vitamin C, to build and maintain healthy tissues.  Anthocyanins and other flavonoids are exten sively metabolized into the body into many other compounds that probably also provide health protection.

Researchers at Tufts University compared the anti-oxidant potential of blueberries to 20 other fruits. Blueberries came out on top. Wild blueberries were used in the study. They are the low bush type found in Maine and Canada. High bush blueberries are also powerful antioxidants.

Red wine has been extensively studied for its cardiovascular benefits. The benefits of red wine have, in part, been attributed to anthocyanins. Blueberries contain similar anthocyanins. Anthocyanins are thought to reduce the risk of cardiovascular disease are by mildly reducing blood coagulation, raising good cholesterol and inhibiting oxidation of cholesterol. Hardening of the arteries is thought to be the result of inflammation of the lumen of the vessels. Anthocyanins may down regulate inflammatory enzymes and therefore reduce the risk of developing hardening of the arteries.

Age-related decline in cognitive function is related to chronic oxidative stress and inflammation on the brain. In a study in the journal Neurobiology of Aging, rats fed blueberry supplements had better scores in maze tests and had less brain cell loss and more viable brain cells after exposure to oxidative stress. According to the lead author in a study: “The current findings should suggest that a diet enriched in blueberry might attenuate degenerative processes due to oxidative or inflammatory stressors similar to the effectiveness of pharmacological strategies related to the hypothesis of Alzheimer’s disease.”

Blueberries are related to cranberries and have a similar action on the bladder. Compounds in blueberries prevent adherence of infection causing bacteria to the wall of the bladder.

We can’t say that blueberries prevent cancer because there is no scientific evidence to support that statement. Studies, however, show some potential and a need for more research. Components in blueberries, according to a laboratory study, may have some activity against colon cancer cells. In addition, a study of dietary habits of women, those who had the highest intake of foods that contain a flavone called kaempferol (found in blueberries, nonherbal tea, broccoli, curly kale, leeks and spinach) had a 40% reduced risk of ovarian cancer.
Fresh and Ripe
Active components of blueberries appear in the berry when it is at its ripest point. They degrade when exposed to heat. To maximize the heath benefits of blueberries, eat them fresh and uncooked. Use blueberries over cereal, yogurt, and in smoothies. You can freeze blueberries. Lay them out on a cookie sheet for best results.
Blueberries are indeed among the best sights, sounds and smells of summer and now available all year round.
Resources

These statements have not been evaluated by the Food and Drug Administration. They are not intended to diagnose, treat, cure or prevent any disease. They are for educational purposes only and are not intended as medical advice or prescription.