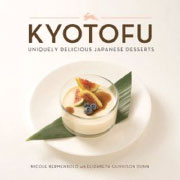 KYOTOFU introduces recipes using delicious, healthful, longevity-boosting ingredients traditionally found in the Japanese diet by applying them to familiar, Western dessert formats. Kyotofu stands for dessert as part of a balanced, holistic approach to eating. ( Check out a few of the recipes from the cookbook)
This book presents seventy-five delicious recipes of both traditional Japanese desserts, and exciting modern interpretations, including including the Chocolate Soufflé Cupcake that was named “Best in New York” by New York Magazine!
Nicole founded Kyotofu Bakery in 2006, one of the most popular bakeries in New York City. As business grew, Nicole closed the bakery in order to focus exclusively on wholesale operation. She currently runs Kyotofu and Hana Kitchens, selling her products nationwide. Nicole splits her time between New York and Los Angeles. 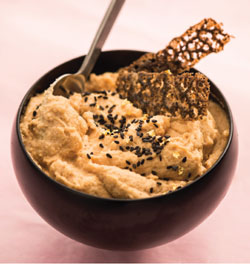 The difference between a great mousse and a good one all comes down to texture. The key to achieving the lightest and most delicate results lie in the combination of eggs and sugar. Be sure to whip your eggs yolks thoroughly, and after adding the hot sugar syrup, don't be afraid to keep whisking the mixture until it grows noticeably in volume, transforming from a liquid to glossy, opaque ribbons.

1- In a medium saucepan fitted with a candy thermometer, combine the sugar with the boiling water and stir to combine. Once the sugar is fully dissolved, bring the mixture to a boil over medium heat.
2- Meanwhile, in the bowl of an electric mixer fitted with a whisk attachment, whisk the egg yolks until pale and creamy. When the sugar syrup has reached 248° F / 120°C or it can be formed into a soft ball in cold water, remove it from the heat immediately and, with the mixer running, drizzle the syrup onto the yolks. Beat at high speed for 3 to 5 minutes, or until the mixture evolves into a firm, yellow foam. Turn off the mixer and let the mixture cool to room temperature, whisking from time to time.
3- Fold in the whipped cream, Caramel, and black sesame seeds. Cover with plastic wrap and chill in the refrigerator for at least 2 hours. Scoop into individual bowls or cups and serve chilled, garnished with a *Black Sesame Tuile, if desired. 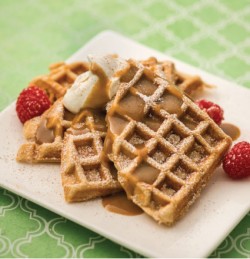 Waffles are popular in Japan, but they’re always eaten as a snack or dessert—never for breakfast, which tends to be dom¬inated by savory foods rather than sweets. This version is a little different from standard American recipes in that it uses kinako flour to give the batter a deliciously nutty, rich, toasted dimension.

1- In a large bowl, mix together the all-purpose flour, 1/2 cup / 71 g kinako, granulated sugar, baking powder, cinnamon, and salt. Add the eggs, soy milk, whole milk, condensed milk, and vanilla extract, and mix until well combined.
2- Spoon the batter into a waffle maker and cook according to the manufac¬turer’s instructions.
3- Whisk together 2 tablespoons kinako with 2 tablespoons confectioner’s sugar, and, using a fine mesh sieve, dust the sugar mixture over the finished waffles. Add a dollop of Chinese Five-Spice Cream and drizzle with maple syrup. Serve immediately.

Reprinted with permission from KYOTOFU © 2015 by Nicole Bermensolo, Running Press, a member of the Perseus Books Group