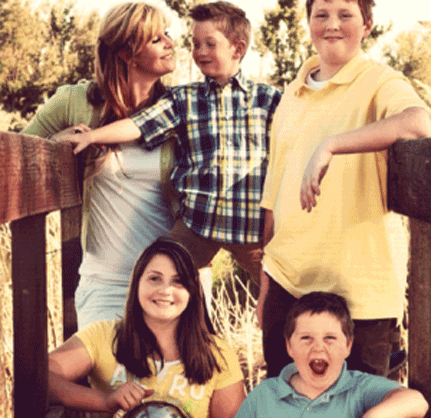 In the weeks leading up to being diagnosed with ovarian cancer, I knew something wasn't right with my body. While I couldn't quite identify what it was, I could tell something was off – something was very different. A long-time fitness instructor and a healthy, active 37 year-old, the 20 pounds that I had quickly gained didn't seem logical, and on top of that, it seemed like one side of my stomach was bloating out more than the other.

I asked a friend, who is studying nursing, to take a look at my side. She pressed hard on multiple areas around my abdomen, an examination technique called "palpating," and discovered something hard as a rock. I immediately went in to see my gynecologist, only to be told that I could possibly be six months pregnant. I knew this wasn't possible since my husband of 17 years had been working overseas in Afghanistan during this time. My gynecologist ordered an ultrasound to take a closer look. As the test was being administered, the room grew quiet. I knew it wasn't good news.
From there things went quite quickly. My doctor ordered an OVA1 diagnostic test to determine the likelihood of the mass being benign or malignant, and the results came back a six on a 10-point scale: a high risk of malignancy.
The news hit me like a ton of bricks. I had heard of ovarian cancer but I didn't think much about cancer, being in my thirties and in great shape. Coming from the fitness world, I really thought if I took care of myself, I wouldn't have to worry about cancer. Boy, was I wrong.

My cancer was found in an early stage, 1C, grade three, which has a five-year survival rate of 93 percent, according to the Ovarian Cancer National Alliance. The doctors went on to stage and remove the tumorous ovary, which had grown to about 17 inches long and 10 inches in diameter; almost the same diameter as a basketball. I had to go through four five-day rounds of chemo, which I thankfully finished on June 1.
Today, I am cancer free. I was able to start back at the gym in July, and I'm teaching fitness classes again.
Again, what a surprise to find I had cancer! It was easy to have children, my menstrual cycle was always very regular and there was nothing about my reproductive system that would have made me think that I would have a problem.
The reality is most women who suffer from this disease are not so fortunate. The American Cancer Society estimates that this year more than 22,000 new cases of ovarian cancer will be diagnosed. I was one of them. Additionally, more than 14,000 women in the United States will die from this disease this year. And yet, 40 years since the "war on cancer" was declared, mortality rates for ovarian cancer have barely budged, while battles against other cancers have made huge progress – breast cancer being one of them. It's time to fight back. It's time to stand up to this silent killer that has quietly been taking lives for far too long. I am grateful they have a simple blood test to help diagnose this often silent cancer.
Using the same gusto and energy we've put into making women and their loved ones aware of breast cancer risks, we should do the same for ovarian cancer, which happens to be the deadliest of all gynecologic cancers. Unless and until we speak for women who have gone before us, ovarian cancer will continue to go unnoticed. Women, we must know the symptoms. The key is having these symptoms for more than two weeks with an increased intensity. In retrospect, I had all of them.
Medical professionals, please get us to the right physicians. My doctors were awesome. I was sent to a gynecologic oncologist for treatment, but a recent study showed that most ovarian cancer patients don't get that care.
For insurance providers, provide coverage for the tests and treatments we need. I was shocked to receive a bill for the OVA1 test, the tool that indicated likelihood of malignancy and ultimately led my gynecologist to refer me to the gynecologic oncologist. We need support from the entire medical community, and that includes insurance companies. That test saved me from having two surgeries. Why not cover it?
We're in this fight together. Now is the time, it's time to fight back and paint the town teal.

About Sarah Evans:  mother of four, she stays quite busy between keeping up with her family as well as her love of fitness. Sarah hopes more than anything that her story will help educate women and bring light to this silent killer that takes the lives of more than 14,000 women every year in the United States.