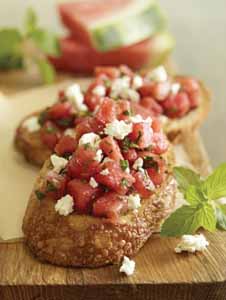 A great pickup food that is easy to make and fun to serve!
12 fresh jalapeno peppers, halved lengthwise and seeded
2 (8 ounce) package cream cheese
*24 slices bacon
Preheat an outdoor grill for high heat.
Spread cream cheese to fill jalapeno halves. Wrap with bacon. Secure with a toothpick.
Place on the grill, and cook until bacon is crispy.
*Turkey or vegetarian bacon can be used. If using a vegetarian product, you might want to chop it and place on top rather than wrap, as it is often not pliable. 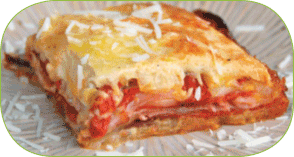 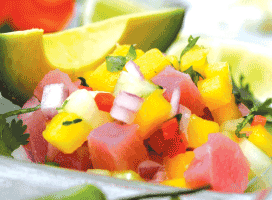 In a stainless steel bowl, toss tuna with limejuice, jalapeño and a pinch of salt. Cover bowl and let macerate in the refrigerator for 45 minutes.
Add coconut milk, red onion and cilantro, and season with salt and a bit of fresh pepper. Taste and adjust seasoning, adding more limejuice, coconut milk or salt if needed. Serving: divide an avocado among six bowls, and season with a pinch of salt. Spoon in the ceviche, drizzling it with the sauce. Garnish with *cilantro leaves.
*Cilantro can be substituted with mint or parsley.

-15 pieces of bacon or turkey bacon

Pre- heat over for 350 degrees.  Slice open the jalapenos and take out the seeds. Mix softened cream cheese and cheddar cheese together, Place a small spoonful of cream cheese mix into a jalapeno. Close the jalapeno and wrap it with a piece of bacon.  Put a toothpick through it to make it stay together.  Place on a foil-lined baking sheet and bake for 25-30 minutes.

Yields one 9-inch tart or 6 individual 4¼ inch mini tarts. Either option should be a fluted pan with a removable bottom.  (Note: you may use store bought pastry or your own favorite pastry recipe.)

Characterized by their blue veins of mold and their complex balance of flavors, Blues are one of the most exquisite of the French artisanal cheeses. Bleu d’Auvergne, for example, cheese from the Auvergne region in south-central France, where it has been made since the middle of the 19th century, has a soft pâte possessing a grassy, herbaceous, and (with age) spicy, pungent taste. But it’s the mold that makes this cheese audacious: Blues are ripened for at least three months, and can be ripened up to nine. Blue mold introduced in the aging process is developed by air injected into the pate through syringes, resulting in the blue-gray veins that can dominate an older Blue. The taste is unparalleled on its own, but is also a perfect match for salads and pasta, or as the finishing course of a bold meal.

Roasted Red Bell Pepper and Artichoke “Tapenade”
Serves 14; 2 tablespoons per serving
12 ounces roasted red bell peppers, rinsed and drained if bottled
1/2 14-ounce can quartered artichoke hearts, rinsed and drained
2 ounces sliced button mushrooms
3 tablespoons chopped fresh basil leaves or 1 tablespoon dried basil, crumbled
2 to 3 tablespoons fresh lemon juice or cider vinegar
2 tablespoons chopped red onion
2 medium garlic cloves, halved
2 tablespoons olive oil (extra-virgin preferred)
1/4 teaspoon salt
In a food processor or blender, pulse the bell peppers, artichokes, mushrooms, basil, lemon juice, onion, and garlic until coarse. Pour into a medium bowl. Stir in the oil and salt.
Cook’s Tip: To roast bell peppers, preheat the broiler. Lightly spray a broiler pan and rack with cooking spray. Broil the bell peppers on the broiler pan about 4 inches from the heat, turning until the peppers are charred all over. Or grill whole bell peppers over medium heat for 2 to 3 minutes on each side. Put the broiled or grilled peppers in a plastic or paper bag and close the bag or put them in a large bowl and cover with plastic wrap. Set aside for 5 to 20 minutes. Rinse the peppers with cold water, removing and discarding the skins. Cut the peppers in half and discard the cores, seeds, and stems. Blot the peppers dry with paper towels. Roasted bell peppers will keep in an airtight container in the freezer for up to four months.

“Bathing Beauty”, an article in the magazine section of The NY Times, written by Oliver Schwaner-Albright, refers to “a fine kettle of fish.”  And fish is considered one of the healthiest foods we can eat.  In spite of the many contaminants discovered in our oceans and rivers, the value of the Omega III in fish is worth the risk, for now, most nutritionists agree.