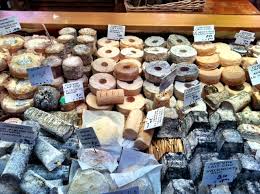 Characterized by their blue veins of mold and their complex balance of flavors, Blues are one of the most exquisite of the French artisanal cheeses. Bleu d’Auvergne, for example, cheese from the Auvergne region in south-central France, where it has been made since the middle of the 19th century, has a soft pâte possessing a grassy, herbaceous, and (with age) spicy, pungent taste. But it’s the mold that makes this cheese audacious: Blues are ripened for at least three months, and can be ripened up to nine. Blue mold introduced in the aging process is developed by air injected into the pate through syringes, resulting in the blue-gray veins that can dominate an older Blue. The taste is unparalleled on its own, but is also a perfect match for salads and pasta, or as the finishing course of a bold meal.

Look: Known for a consistency that crumbles under pressure, Blues can be as soft as Brie or as crumbly as aged Cheddar. Young Blues have a pale green pâte, whereas an older Blue can be grayer with small, blue-gray holes. In general, seek an evenly veined, yellowish or white pâte, and a clean, fresh scent. Says Horton, “Avoid any blues with yellow, orange or red molds, as they have a sulfated taste and smell. Dried out brown or hard rinds and warm-colored mold is the sign of an inferior Blue.”

Taste: Tastes vary greatly from mold to mold and cheese to cheese. Bleu des Causses can be zesty — even peppery — and less buttery. Fourme d’Ambert is characterized by a buttery taste that is less salty and less bitter. Roquefort should be spicy and tart, and achieve a flavor that is never dominated by saltiness, acidity or bitterness — its magic is in its moderate balance of all of these tastes.

As always, request a taste from your cheese counter manager or fromager. Ask for a center cut for the most “real” taste that the cheese has to offer. If you are tasting several Blues, be sure to taste from simple to complex, mild to strong.

Packaging: Most Blues come in small 8x4 inch drums and can be cut and wrapped in light foil. Look for a cut from a large portion of the drum. If possible, avoid those small pre-wrapped cheeses that allow flavor to dissipate through the plastic.

Storing: Purchase small portions that will be used within the week. Wrap your Blues in wax paper, butcher paper or foil to leave room for air to circulate, then in plastic, and “store in the bottom of the refrigerator,” says Horton. “Treat it like your veggies. Remember that your cheese is alive.”

Serving:Cut damp, crumbly Blues with a pre-warmed knife. When creating food complements, match the strength of the Blue’s taste with something sweet or nutty. The wide variations of Blues can warrant less conventional accompaniments, too: they also pair well with honey, pears, figs, dried apricots, or walnuts.

Courtesy of the Cheeses of France Marketing Council