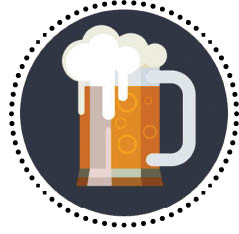 Beer is the one of the most popular alcoholic beverages in the world. Enjoying an almost cult like status in many countries and is a favorite for millions of people around the world.

According to research piloted in Italy on moderate beer, drinking (a bit more than 16 ounces a day) can actually decrease a drinkers’ risk of heart disease

by 31 percent (the same as moderate consumption of wine). Another study done on moderate beer drinking, published in the Clinical Journal of the American Society of Nephrology, found that moderate consumption of beer reduces the risk of developing kidney stones by 41 percent. Another surprising beer fact is that beer is one of the few plant sources of vitamin B12. The B12 comes from bacteria growth in the barley grain.
Beer is also a source of plant-based phytonutrients (found in the barley and hops) but that doesn’t mean you can replace your healthy greens for a cold one.

1.Beer could keep your kidneys healthy. According to a recent study, consuming one beer daily can reduce the risk of kidney disease by a 40%.

2.The fiber content of beer can reduce the levels of LDL cholesterol and help prevent cardiovascular disease.

3.Beer contains vitamins B1, B2, B6 and B12, which can increase the vitamin B levels in your body.

4.Studies have shown that the elevated levels of silicon in beer can support strengthening your bones.

5.Beer contains lactoflavin and nicotinic acid, compounds that promote sleep and might just cure your insomnia.

6.Recent studies have also shown that drinking beer moderately can reduce the risk of heart attack by 40 percent to 60

7.Moderate beer drinking can help reduce the risk of blood clots and heart disease by up to 20%.

8.Experts suggest that beer can also improve your memory. According to studies, beer drinkers are less likely to develop Alzheimer’s and dementia than people who are not beer drinkers.

9.Two glasses of beers a day can significantly reduce stress

10.Consuming beer every day in moderate amounts can prove to have a positive impact on pigmentation and could actually make the appearance of your skin look healthier and smoother.