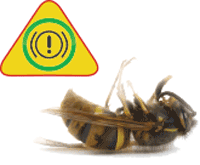 These pesticides act on certain nerve receptors that are abundant in the insect's nervous system. They are highly toxic to most arthropods, but much less so to mammals. Because neonicotinoids are water soluble, plants easily absorb them and they work well as systemic treatments.
Neonicotinoid insecticides are often applied to seeds of agricultural crops, particularly corn and soybeans. These seed treatments are intended to suppress damage by herbivorous insects during the early stages of plant germination and growth.

Honey bee population decline has been receiving a lot of attention lately, and with good reason. Without bees, many important crops would disappear, such as apples, almonds, blueberries, cherries, avocados, and oranges. Some of the awareness campaigns addressing honey bee loss have been especially poignant, such as the pictures of a Whole Foods in Rhode Island that pulled all bee-dependent fruit and vegetables off its shelves for a day, revealing a near-empty produce department. There are many studies examining the cause behind the recent decimation of honey bees, also known as Colony Collapse Disorder (CCD). In this blog, I’ll review some of the newest studies about the factors affecting CCD, and how organic farming can help mitigate these damages.

A study out of Penn State and the University of Florida this year showed that pesticides may be killing honeybee larvae within their hives. The PLOS publication focused on four common pesticides—fluvalinate, coumaphos, chlorothalonil and chlorpyrifos. Researchers found that exposure to some pesticide cocktails combining these chemicals have a synergistic effect on bee larvae, and are more toxic than one would expect from individual pesticide exposure levels. The study also found that even inactive ingredients in pesticides, such as the inert additive NMP, can be highly toxic to honeybee larva.

Research by Nigel Raine, a professor in Guelph’s School of Environmental Sciences, and Richard Gill of Imperial College London was published today in the British Ecological Society’s journal Functional Ecology.
The study shows how long-term pesticide exposure affects individual bees’ day-to-day behaviour, including pollen collection and which flowers worker bees chose to visit.
“Bees have to learn many things about their environment, including how to collect pollen from flowers,” said Raine, who holds the Rebanks Family Chair in Pollinator Conservation, a Canadian first.
“Exposure to this neonicotinoid pesticide seems to prevent bees from being able to learn these essential skills.”
< Prev Next >