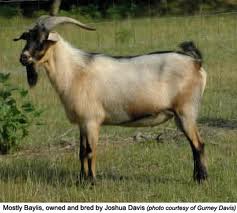 As wildfires consume parts of California larger than some smaller states, everyone is talking about how we can prevent such disasters from getting going in the first place. One novel approach is to enlist goats. Not as firefighters—although their surefootedness and determination would probably serve them well in such situations

—but as grazers to keep the forest underbrush clear of the tinder-like grasses, bushes and small trees that allow flames to jump to the higher forest canopy and get further spread by the wind.

Goats have been called in for fire mitigation purposes across parts of California, Arizona and other drought-prone parts of the western U.S. In the Oakland and Berkeley hills regions of California’s Bay Area, where the combined effects of drought and a bark beetle infestation have killed thousands of acres of trees, public agencies and residents have enlisted the help of goat herds to suppress weeds and keep down the fire risk in the process for what remains of the area’s forest cover.

“The goat clearance scheme is one of the key reasons the Bay Area hasn’t had a recurrence of a catastrophic fire in decades,” says Tom Klatt, former manager of the Office of Emergency Preparedness at UC Berkeley and the author of UC Berkeley’s 2007 Fire Mitigation Program Annual Report.

Other earth-minded land managers are going goat as well. The Nature Conservancy recently hired goats to keep dry grasses and other tinder-like plant matter down at its Hassayampa River Preserve in Arizona, where the constant threat of summer fires haunts nearby homeowners while endangering the integrity of the area’s unique and fragile riparian ecosystem.

Using goats to control forest brush may seem like a novel idea, but it’s really been around as long as grazing animals have roamed the planet looking for nourishment. But with ever-increasing human development, wild grazers are fewer and farther between. The problem is exacerbated by our building our homes so close to (and sometimes within) forested areas that naturally burn occasionally. Efforts to then suppress all forest fires—even naturally occurring undergrowth burns—to protect these homes have led to “tinderbox” conditions ripe for those large destructive fires that spread for hundreds of miles, blown by the wind from treetop to treetop.

Grazing goats are also used in other endeavors. “Goats can be utilized as an effective bio-control agent to reduce weed populations to economically acceptable levels,” says Malmberg, adding that weeding with goats requires no pesticides or herbicides and generates zero greenhouse gas or other harmful emissions.